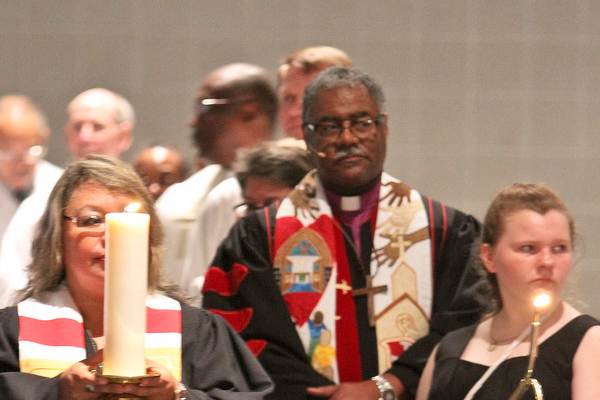 The 2016 North Central Jurisdictional Conference of The United Methodist Church will convene on July 13 in Peoria, Illinois.  Gathering together under the theme, “Living Together…In Unity…Amid Diversity…for Ministry,” the regional assembly is guided by the scriptural words of Ephesians 4:1-16.

In his welcome letter to the delegates host Bishop Jonathan D. Keaton identified the primary reason for the 2016 edition of the once-every-four-years meeting.  “May we dedicate ourselves,” he asks, “to the cause of Christ in this election process.”  Four new bishops of the church will be elected to succeed the four who are retiring – Bishop Michael Coyner (Indiana), Bishop Deborah Kiesey (Michigan), Bishop John L. Hopkins, (East Ohio) and Bishop Jonathan Keaton (Illinois Great Rivers).  In all, some seventeen endorsed candidates are vying to be their successors.

There are two endorsed candidates from Iowa.  Rev. Dr. Barrie M. Tritle was endorsed by the delegation and by the 2016 Iowa Annual Conference session in June.  Rev. Dr. Lilian Gallo Seagren was nominated from the floor and also endorsed by the nearly 1500 members of the annual conference meeting in Des Moines.

Beyond electing bishops, the Jurisdictional Conference also includes election processes that determine who will serve on general boards, agencies, and jurisdictional committees. While these bodies don’t tend to get as much attention, they are very important. For instance, Bishop Trimble points out that the Jurisdictional Missions Council provides funding and ministry support for projects that take place in the jurisdiction and are supported by its apportionments. Those jurisdictional dollars might go to support anything from disaster relief to racial-ethnic ministries. “There are some things we do within the jurisdiction that help advance the mission of making disciples of Jesus Christ and transforming the world in mission, so we’ll celebrate those as well at Jurisdictional Conference,” adds the bishop.

Phil Carver, Southeast Field Outreach Minister and Chair of the 2016 delegation, which includes twelve clergy, twelve lay members, and an additional six clergy and six lay reserve members.  Carver has been to nine jurisdictional conferences over a thirty-two year span.  Having taken part in his first jurisdictional conference in Duluth, Minnesota back in 1984, Carver is no stranger to the process. “I’ve watched bishops serve and retire several times over,” he says of the bishops whose elections he has participated in.

Carver notes that during that time “Our diversity is reflecting more and more the changing demographics of our communities and our conferences.  We have many more people who are international nominees that are serving in the central United States, so that has an impact on the wide range of gifts and graces that we can select from as we’re looking for leadership in our various conferences.”

The 2016 North Central Jurisdictional Conference will begin on Wednesday, July 13, at 10 am with the Opening Service of Worship featuring the preaching of Bishop Jonathan Keaton.  The first ballot is sated for 2:30 pm that afternoon.  “With the number of elections happening,” Carver points out, “the process could be time-consuming. I’ve participated in some conferences where we’ve had a significant number of ballots – 40 plus – so it could take quite awhile, but the goal would be that by Friday afternoon our elections will be complete.”

Reflecting back on the 2008 North Central Jurisdictional Conference, held in Grand Rapids, MI, Bishop Trimble observed, “This can be a time of nervousness and eager anticipation for those people who have been endorsed by their annual conferences and are waiting to find out whether or not they’ll be elected. “I think some of them are probably thinking, ‘Wow, did I really say yes to this? I think many of them are deeply prayerful at this time. I remember really engaging in a significant amount of prayer, and hearing from well-wishers, persons who were saying ‘I’m praying for you’.”

Balloting continues into Thursday, July 15, in addition to the Service of Worship with Bishop Hee-Soo Jung preaching.  Bishop Deborah L. Kiesey will present the Episcopal Address at 1:30 pm.  A Recognition of Retirement service leads to a recess followed by evening voting.  The election process will continue as long as necessary on Friday, July 15.

Once all four new bishops are elected the process of assigning the nine bishops of the Jurisdiction to their respective episcopal areas for the upcoming quadrennium (next four years).  The usual service term in a particular area is eight years, though missional reasons may extend it to twelve or shorten it to four.  “Bishops are itinerant,” notes Bishop Trimble, “as are pastors in The United Methodist Church, so when you offer yourself to the episcopacy, you are saying ‘I am offering myself, not only to be elected as a general superintendent for the whole church, but to be assigned to a residential area to serve as a bishop of an annual conference or an episcopal area.’”

“The Jurisdictional Episcopacy Committee that consists of two representatives, one lay and one clergy from each of the conferences, who then meet together and assign the bishops for the next four years,” said Phil Carver. Norma Morrison is the Iowa delegation’s lay person designated for this task, and Lillian Gallo Seagren (or Katie Dawson, in the event that Lillian is elected bishop) is their clergy representative. “They are people who are well-versed and knowledgeable about the mission and the strategic priorities of the Iowa Conference,” says Carver. “So they’ll go in with that knowledge and be a part of that conversation to help select where each of those bishops are assigned, in the hope that they can find a good balance for the needs of all the various episcopal areas.”

“I did not know actually until the night before the Jurisdictional Conference was over, Bishop Trimble remembered, “that I would be going to Iowa to serve. So those persons who offer themselves, they’re aware that if they’re elected they’re going to be going to one of the places in the North Central Jurisdiction, most likely someplace other than where they are currently serving in ministry.”

One of the most powerful worship services is the one that comes at the very end of Jurisdictional Conference, the Consecration Service. The four new bishops having been elected by the votes and voices of the delegates from all the annual conferences, including those representing Iowa, their new colleagues in the College of Bishops do a laying on of hands and pray for them. Not only do active and retired bishops from their own jurisdictions take part.

“I think about the Apostolic tradition of the passing on of the mantle, the blessing and consecration of bishops, which is part of our worship liturgy in the United Methodist Church,” Bishop Trimble says of this important moment. Remembering his own consecration and the hands and words of the bishops who blessed him, he adds, “I realize that we continue to stand on the shoulders of those who have gone before us.”

The announcement of the assignments for the nine bishops of the North Central Jurisdiction is made near the end of the Consecration service and immediately following the benediction the bishops meet and are greeted by persons from the area where they will serve for the next four years.