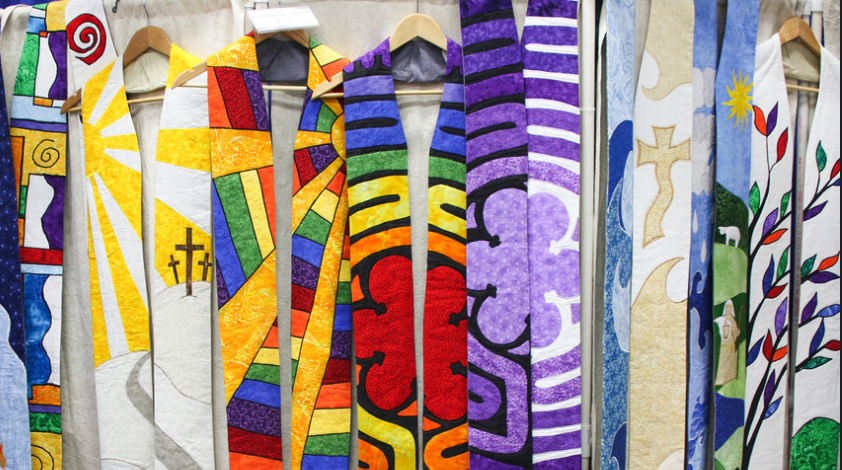 June 14, 2016
share
If you’ve ever wondered where some UMC pastors and bishops get the striking, beautiful stoles that they wear as a part of their vestments, Needling God may well be the answer. Needling God is the husband-and-wife team of Ben and Karen Carter-Allen, and they had many of their stoles and scarves on display at the Iowa Annual Conference this year.

In fact, one stole was on display for everyone to see when Bishop Elaine Stanovsky of the Rocky Mountain and Yellowstone Annual Conferences preached. Karen was commissioned to design it for this purpose, and was sent artwork, colors, and a scripture as inspiration. “I designed the stole based on the scripture of the angel on a stone with the ladies running away,” she explained from the Needling God booth at the conference.

The design process often involves creatively re-using patterns and designs that she has utilized in the past in new ways. “I’ve done a stole with a tomb and a path, with the crosses and the sun. But I changed the sun so it’s a sunrise from the bottom of the hill. I took that tomb design and then put the angel on the stone, and then had the women up toward the top.”

Other things that have to be taken into consideration in the design of a new stole include the height of the person who will be wearing the stole, and also the fact that they might be speaking behind a podium. For the latter reason, it is important to make sure enough of the design can be seen near the top part of the stole. Designing stoles is definitely its own unique artform.

Karen’s beginning as a stole designer came during her final semester in seminary when she took a class where she learned to make liturgical art. “I learned weaving, needlepoint, embroidery, applique (which is what I do now), machine applique, hand applique. I learned all these different techniques. And for the final project, I made a needlepoint guitar strap for myself, and my husband’s first stole.”

After they graduated, she created Needling God using his stole to create others. “It had water at the bottom, so that’s all the baptism stoles. The hills became Psalm 23 stoles. The top was flames coming down, and that became the vine pattern.” And all of that soon blossomed into other patterns and stoles.

“A lot of what we do we call visual theology,” said her husband Ben. “You talk about theology, about the words that you use, the stories that you tell. But this is the visual stuff, this is the images that you see. This is the spots where going beyond just the words, but into the colors and the textures of our faith.”

A particular challenge in creating visual theology came when Needling God was commissioned to make a stole for Bishop Trimble, which he has since worn for many different services. “Bishop Trimble was the toughest for words. He said ‘radical hospitality of justice,’” explained Karen. “What color is radical? What color is hospitality? So I created a heart with a church inside with the doors open, where you can see the altar, and all these little people and hands reaching up to the heart.” On the other side of Bishop Trimble’s stole are more hands of many different colors, many of which represent Karen’s own friends.

“I look at all different aspects of a person when I create a custom stole for them,” she said, pointing to a catalogue of her designs. “This really thick book now is all the custom stoles I’ve done. And there’s so many things from cows to tractors to hands to sign language.”

Ben noted that, “Many times you wind up with somebody who has gone looking for that one special image that’s been a part of their call story, and they can’t find it anywhere. So they come to us and they say, ‘This is special to me. This story, this image story is special to me. I haven’t found it anywhere else.’ And we say ‘Oh we can draw that!’ And it winds up on a stole.”

“If I can draw it, I can create it,” assured Karen. “Sometimes I’ve been surprised how many different things we’ve done. Like this new one is a labyrinth. We have different colors. This is a rainbow labyrinth.”

Ben explained that they were commissioned to do a labyrinth stole, but had a hard time finding examples of other labyrinth stoles online for inspiration, so he went a step further. “One of the most famous labyrinths is from Chartres Cathedral in France. So I found a black and white image of it, blew it up to a four foot diameter size, and cut two six inch wide strips right out of the middle of it, and that became our pattern. It has been phenomenal how much that image resonates with people.”

You can see their many stole designs and get in touch with Karen and Ben Carter-Allen online at NeedlingGod.com. “We’re also on Facebook as well, so you can like us on Facebook and see all the different things in progress,” added Karen.
“We’re always looking for new ideas from other people,” concluded Ben, “and hoping to help other people take their vision and their call and turn it into that visual.”