Pastor and author Lillian Daniel falls in love with Dubuque 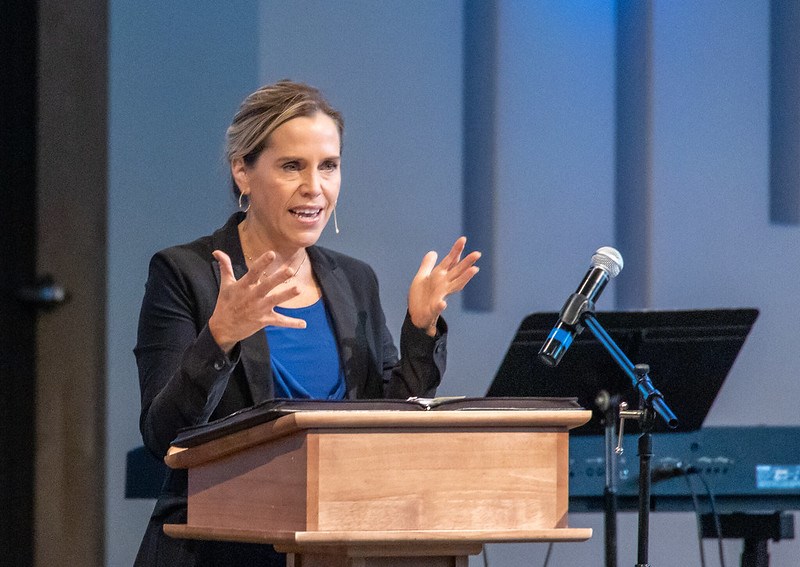 October 07, 2019
share
Rev. Dr. Lillian Daniel, a graduate of Yale Divinity School, has worked as an adjunct professor and is the author of several books, but she considers herself “a parish pastor first.” She is currently the senior pastor of First Congregational Church in Dubuque, but it was a long and windy road that brought her to Iowa.

From the suburbs to the city and back
Rev. Daniel began as an associate pastor in Cheshire, Connecticut, which was a large, thriving suburban church. “I was there for three years with a senior pastor that had been there 34 years, and he was a great mentor. It was great, but I was itching to do my own thing. So then I had the opportunity to get my own church in New Haven.”

Called Church of the Redeemer, she describes it as “a dying, urban church, least likely to survive or grow, built for the days when everyone came into the city for church.” She was there for eight years—and loved it.

But the life of a pastor is often an itinerant one, and next she was off to the affluent suburbs of Chicago to a big suburban church, where she pastored for 10 years. Eventually, though, she found herself feeling burned out and experiencing a personal and vocational crisis. “I really wondered, am I meant to be a pastor? What’s next?”
See a FLICKR album of the event
Looking for a new place to grow
“As I came through that, I realized that I definitely missed being a pastor, but I had gotten myself into a situation where I wasn’t getting to do the things that brought me joy as a pastor,” Rev. Daniel explains. Although she had loved the people there, she wanted to get out of the suburbs, and realized, “I miss being in a city. I want to take one of those churches least likely you grow. I want to try that again.”

The question was where? She didn’t want to go too far because she had grown children in Chicago. “I wanted a livable, Midwestern city, and Dubuque pops up, and I kind of fell in love with it.”

Learning curve
“I’ve loved Iowa, and it’s been a very big learning curve for me because I think each community is often dominated by whatever the industry is. In New Haven, it was the university. We were a college town, and so it was like church got filtered through the lens of academic life. Sermons were like lectures,” Rev. Daniel laughs.

“I go to Chicago, and it’s a much more corporate, sales, marketing mentality. In Iowa, it’s the first place I’ve lived where the agricultural model is the dominant metaphor of life. And I don’t know anything about that, so it’s been really fun!”

Writing for clergy and laity
During the last several years of her journey, Rev. Daniel has also been writing books. While her early focus was writing for clergy, she has more recently broadened her scope to laity, and trying to bridge the gap between the two. “What I would hear when I would talk to clergy is they would say, ‘I would love to try this stuff, but my lay people are not open to it’,” she says.

Meanwhile, when she spoke to lay people, “They’d say, ‘I’d love to do this, but my controlling pastor won’t let us do anything different or won’t take the risk.’ And I was like, these people gotta talk to each other!” Rev. Daniel felt that she might be able to help bring the groups together to communicate more clearly and meaningfully.

Preaching to the visitor
For her next project, Rev. Daniel wants to speak directly to the clergy again. “I’m interested in this idea that worship is catechesis, and that that’s really our only shot at formation. Nobody is going to your Bible study, no one is going to your six-week membership class. You’ve got one shot with these visitors or these ‘nones’. So how do we take that worship hour and introduce some catechesis and teaching into it?”

She’s also interested in exploring how to change preaching by imagining the ‘never have’ and ‘not yet’ people who are sitting there. “Even if they’re not sitting there, I’m convinced that thinking of those people’s questions makes us better preachers.” She believes that a lot of pastors make the mistake of just preaching to one person. “A good preacher has imaginary people in the pew. They’re saying, ‘This is for Jane Smith, and this is for my cousin Bob who hates the church, and this is for the 16-year old over there.’”

Shaking things up
Although some people may think that it’s hard to be a pastor at a time in history when church attendance is down and non-belief is up, Rev. Daniel doesn’t see it that way. “People don’t go to church out of obligation or social pressure or that kind of thing. We have an opportunity to be with people who really want to be there and are seeking God, and I think that’s exciting. I also think the institution is in enough crisis that there’s some openness to trying new things,” she says. “We’re at a moment when I think the Holy Spirit is doing something and shaking us up.”
Rev. Dr. Lillian Daniel was the featured presenter at the fall 2019 gathering of the Order of Elders, Order of Deacons, and Fellowship of Local Pastors and Associate Members of the Iowa Annual Conference.