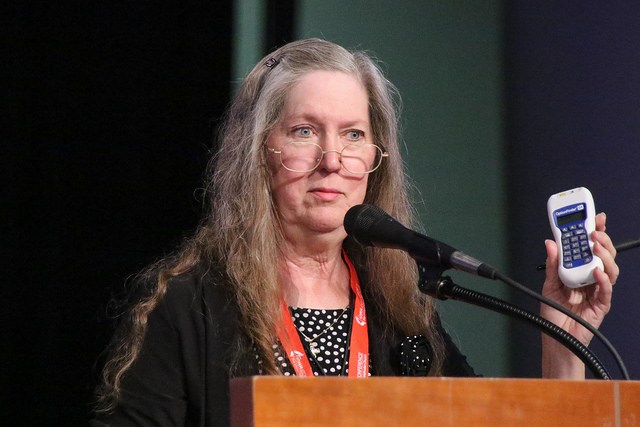 Listen to the Iowa Conference Conversation podcast with Patty and Dr. Art McClanahan


What LaGree first learned about the job was that it would automatically make her a member of the Annual Conference Session Planning Committee, the Rules of Order Committee, and the Connectional Ministries Council. “Those were things that I had not been part of before and thought might be a very interesting insight to the workings of the Annual Conference. Less information was shared about the actual week-to-week duties. But that is something that I learned later on, and that’s the part that I’ve really enjoyed the most, because I’m a very detail-oriented person and there’s a lot of detail work connected with being the Conference Secretary.”

A Host of Responsibilities

The job does not, as some might think from the title, include secretarial duties like answering phones or filing. Rather it is more like being an organizational officer in a business. LaGree would literally sit at the right hand of the bishop during conference sessions, helping to keep things on track and organized, especially during legislation.

A really key responsibility that she had was ensuring lay involvement in the conference. “It is a tenet of the United Methodist Church to have equal lay and clergy at all of our conference sessions at every level,” she explains. “So it’s the Conference Secretary’s responsibility to enact the rules that are already in place in our conference Rules of Order, to be sure that we have equal lay and clergy at Annual Conference.” She would also handle the application process for the election of delegates to the Jurisdictional Conference every four years.

Another of LaGree’s major duties was to be in charge of the conference journal and the pre-conference manual. “I’m very fortunate here in Iowa that we have conference staff persons that do the bulk of that work,” she points out. In some cases that would include members of her staff taking minutes at each session and keeping track of motions. But it also meant working closely with other staff members who assemble and finalize the journals and manuals.

“It is a collaboration,” LaGree insists, “and that’s been a lot of fun. I’ve been able to learn so much from working with people, many of whom have had many more years’ experience than I had, especially when I started.”

Another of the pleasures of being Conference Secretary is reaching out to friends outside the state. “Our tradition is to send greetings to all the episcopal leaders across the country who have ties to Iowa. That includes bishops who have served here formally and bishops who have been elected from the Iowa Annual Conference.” This year they also sent a special greeting to Bishop Thomas Bickerton, who was a guest at the Iowa Annual Conference. “He was such a blessing to us this year, and we want to let him know that we will be praying for him and his conference as they meet.”

In the Family Business

During her time as Conference Secretary, LaGree found out something about her family history that made her job all the more meaningful: She learned that her own great-grandfather, who she knew had served as a pastor in Iowa, once held the very same conference position as she.

“He served as Conference Secretary in the Upper Iowa Conference for seven years – from 1919 to 1926. And exactly 90 years later, my tenure was from 2009 to 2016. That is a very special thing for me to have discovered, and very special to my family, particularly his granddaughters – my mother and her sisters,” says LaGree. “Now I didn’t retire after seven years just to match his tenure, but it is a wonderful, serendipitous thing to have discovered.”

As she ends her time in the role, LaGree thinks of the great relationships she has formed. “Several years ago, my husband and I downsized to a small condominium, so I asked if there was space in the conference center where I might have a desk. I’ve had a cubicle here for I think six of my seven years, and that has been a delight. It has allowed me to get to know persons on the conference staff that I otherwise might not have worked with directly. It has really given me a home base and I think has made the position a little more visible than it otherwise might be,” she says.

“I will miss the people that I have had the privilege to work with.”