Peace in the World is Our Responsibility 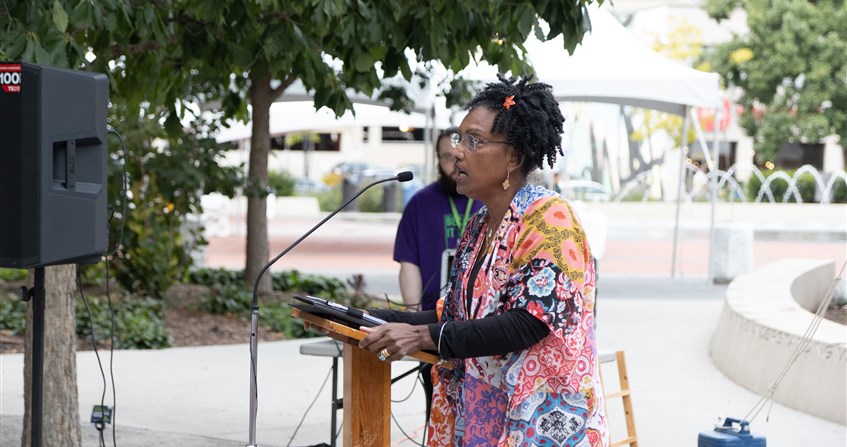 September 27, 2022
share
Dr. Kesho Scott, the main speaker at the International Day of Peace celebration at Cowles Commons in Des Moines, used the United Nations theme for 2022, “End Racism—Bring Peace,” to remind the crowd that peace in the world is everyone’s responsibility.

The Des Moines Faith Committee for Peace, with a mission to help lead the ecumenical and interfaith communities in raising prayers and voices to end the war, marks the 20th year as the host. Many Iowa United Methodists sponsor this event. See an album of images from the event.
Scott is someone who has spent her whole life in some form of activism. She is an internationally renowned Diversity Trainer/Consultant, an Associate Professor of American Studies and Sociology at Grinnell College, and an award-winning writer.

“I think that my first memory of ever experiencing an injustice was watching television and seeing African Americans hosed down by the police in the south because they sought to register to vote. I remember talking to my parents about it while living in Detroit, Michigan, and feeling secure up in the north. I couldn’t imagine that human beings would act like that,” said Scott.

At the time, Scott was a young teen, and she asked her grandmother what could be done, and she said, ‘get people to vote.’ She went to her high school and started a voter registration campaign, and they were able to charter some buses and go to the nearby state and help people in the rural parts of Indiana vote.

“Bobby Kennedy was running for President, and I had so many great hopes for this person, bringing together in racial harmony and bringing poor and disadvantaged communities together and beginning to talk about women’s issues, and then he was assassinated, and that shifted my life,” said Scott.

Scott’s activism was spurred by wanting democracy to be for everyone. She comes from a tradition of strong women who always worked outside of the home and had a voice and their own money.

“I think what captured it for me is if I wasn’t going to have my voice, who would speak for me? I saw one too many women having something to say, and being willing to say it together, gave me a lot of courage. I was born when America was legally racially segregated, and I grew up and came of age when America ended racial segregation. So, I began to see these voices across racial, religious, and linguistic differences, and that inspired me,” said Scott.

Scott said that getting people motivated to contribute to the issue of peace is helping them to understand that they don’t have to do it all and that contributing a small part makes a significant difference when added up—speaking up one day, donating, or returning a banned book to school the next.

“Peace is our responsibility, and I believe we must be accountable to someone to maintain peace. We can’t just have it as a feeling,” said Scott. “What does it look like in your life? I think what will keep people motivated is for them to see that Peace begins with ME, and they can do that through kindness and being willing to listen. I hope the biggest movement toward peace is one in which we will save each other.”