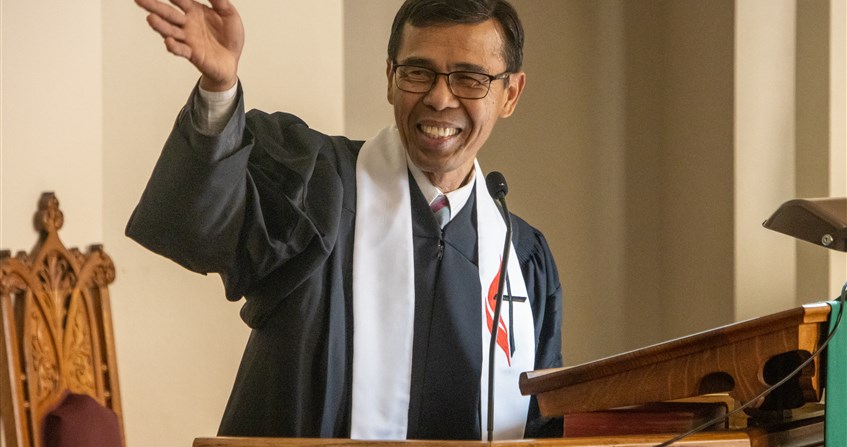 “I have served in Iowa for 19 years now,” said Rev. Dr. Moody Colorado, the new superintendent of the South Central District. He describes his new domain by the driving, which he notes is “relaxed” and full of “winding roads”. That said, he concedes that he has been getting a lot of help from his cell phone’s GPS as he’s made his way around the district for meetings and conferences. He is very engaged in the work of developing leaders in the church and relating better to lay leadership.

Pastoring is a family business
Although he was once a manager at a mining operation, it was practically preordained that Colorado would become a pastor, as it is a family tradition. “Great-grandpa was a local pastor because he was a translator for the American missionaries in the Philippines in 1900. He translated for the missionaries, and he kept on translating even after they had gone, so they appointed him as a local pastor.” His grandfather and father followed that same path, and subsequently he and two of his siblings – a brother and sister – also made their way to the seminary.

Although Colorado says his choice was very much of his own volition, he does admit to getting a bit of inspiration from his own first name. “I discovered that my dad, who was in the seminary in the year that I was born in 1960, his favorite evangelist was Dwight L. Moody.” And so, Moody Colorado was born.

In his youth in the Philippines, Colorado grew up in a home filled with hymns and prayer. “I was the favorite bible carrier of my dad. In one hand I was holding the bag of hymnals, and in the other hand the bag of bibles. And my dad, the district superintendent, pulled me everywhere he goes.” Now he holds that same position as his father, and his brother Bernie as well. “By God’s grace, we have a photograph of the three of us, district superintendents.”

Doctor preacher
Rev. Dr. Colorado is always eager to better himself as a pastor, which is how he got his doctorate of ministry in preaching. “When I came to Iowa, I realized my preaching in the Philippines may not be the kind of preaching that works in Iowa and my district superintendent was quick to send me to a preaching academy.”

But even after completing that, he felt like he had more to learn, and so enrolled in the doctoral program of the Association of Chicago Theological Schools, which he was able to complete with three weeks every year in Chicago, and then studying on his day off each week back home.

A season of suffering and resurrection
“I am passionate about prayer,” declared Dr. Colorado. It has been especially important to him this past year as he has dealt with his wife’s illness and death. Since she was born with a heart defect, he feared she was already dying before they even came to the United States, but being able to move here was an answer to prayer.

“My wife’s life was extended all the time she was medicated here in the United States,” said Colorado. “And when she developed cancer, all the churches we were related to, they prayed for us, and we prayed with them. I believe during all those times we were praying that God accompanied us in the most difficult situation.”

She became weaker and weaker during the Lenten season this past year, as they were back and forth between home and hospital. Many people were praying for them, but she died right before Easter. “It was a 40-days-of-wilderness experience, the suffering and death of my wife, and now I’m celebrating the resurrection of Jesus and my wife,” recalled Colorado, explaining how the coinciding of those events helped transform something terrible into something celebratory. “I am very, very sure that God was behind all that we had experienced.”

The joy of music and laughter
Perhaps his new position marks the beginning of a new season for Colorado. At the recent service celebrating his becoming a district superintendent, he had an especially joyful moment playing a piano duet with his son. “I love playing with my son, because I sound like I’m very good when I’m playing with my son,” he laughs. “My son always tells me, ‘Hey dad, this piece is very good, and I will give you the easy part’.”

Whether or not his son will also join the ‘family business’ is uncertain, but in any case, Colorado feels like he has been very much welcomed into his new role, from getting prayers to getting laughs. “All of the church conferences that I officiated, I crack my jokes and the good thing is, the people understood my joke and the people laughed. And if they did not laugh, I request them to laugh!”

Committing to the work of the church
Although he is a prayerful person, Colorado is also practical about the needs of the church and, as he thinks about his new appointment, he emphasizes his hope that his fellow Methodists will maintain their tithing. “We in the cabinet would only be able to understand how to manage things if we know there is something to manage. There is something you can depend on and count on,” he says. “I know my mandate, but I also need to know my funding, so that I can go to work.”

“There may be things that we may not be able to do because the funding is not enough,” he acknowledges. “It will be by God’s grace. But if people would make the commitment good, we will do great. That’s what I believe.”