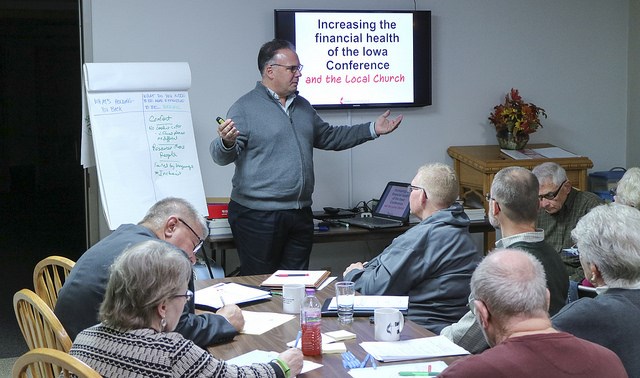 November 06, 2015
share
An expressed desire to be able to interact with Conference leaders and people in mission and being partners in ministry marked the conversation at the second of the fall 2015 “town hall” meetings.

A modest sized group of more than a dozen lay and clergy gathered at Eldridge United Methodist Church for the Thursday evening “town hall,” which was the second in the series of 10 scheduled for November. Conference Treasurer Terry Montgomery and Director of Communications Dr. Art McClanahan, lay and clergy from the Southeast District, and Field Outreach Minister Phil Carver engaged in conversations about financial matters and communications ministry opportunities. (The initial gathering was held on November 3, at First UMC, Ottumwa with Communications Manager, Liz Winders, accompanying Terry.)

Click here to see images of the Town Hall.

The evening began with a review of last year’s round of town halls and the “7 big ideas” that emerged from those sessions.  The small group discussion that followed focused on the question of how the Conference can become more accountable and transparent.  Among the five ideas shared from that reflection was a consideration of ways to make it possible for Conference leaders to be able to personally interact with lay and clergy of the 780 congregations.  Distributed information is appreciated, as are multi-media reports and messages.  The greatest impact, it was said, takes place when people can personally interact.

A second aspect of the evening centered on “Telling the Story – Together.”  “Communicating so everyone understands,” the vision of the Conference’s Communications Ministry Team, becomes real when “a terrific communications ministry” exists both within a congregation and to the community.  Town hall participants described what works well for them, and why, and also shared some of they need to be able to be even more effective.

The third segment of the town hall examined ways to increase the financial health of the Conference and the local church, including a discussion of apportionments.  Why apportionments are paid, and, in some cases, why not, were offered by group and the implications of the fact that the current apportionment rate is approximately 80 percent were identified.

Terry Montgomery closed the evening by inviting all to join in the Prayer of St. Francis, which includes, ”where there is doubt, faith…where there is despair, hope…Grant that I may not so much seek to…be understood as to understand…”