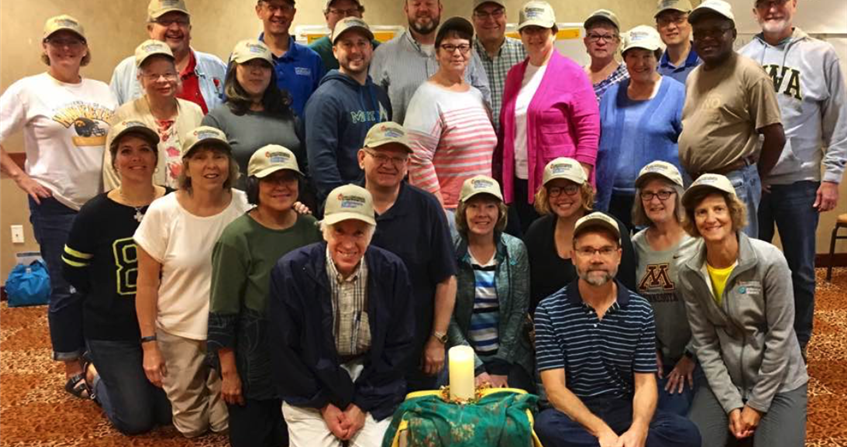 September 13, 2017
share
On September 8 and 9, a group of Iowa Conference of The United Methodist Church leaders gathered at Honey Creek Resort in Moravia, Iowa to spend time reflecting and recreating together as a team. The mission of the Leadership Team Collaboration was to engage leadership staff in discernment and planning that builds trust and enables completion of important tasks while other healthy conference processes are underway.

Bishop Laurie opened with devotions on Friday afternoon using scripture from 2 Kings 6:8-23. In the story, Elisha thwarts an attack on Israel by the army of the King of Aram. When the king of Israel saw that they were surrounded by the army of Aram, he asked Elisha, “Father, shall I kill them? Shall I kill them?” Elisha answered, “’No! Did you capture with your sword and your bow those whom you want to kill? Set food and water before them so that may eat and drink, and let them go to their master.’ So he prepared for them a great feast; after they ate and drank, he sent them on their way, and they went to their master. And Arameans no longer came raiding into the land of Israel.” Elisha knew that the solution was in allowing God to lead them. Bishop Laurie’s emphasis was that now is the time to be adaptive in our leadership so we, with God’s help, can lead the change that is needed and invite all people to the table.

Revs. Bill and Sheri Daylong led the group on both days during times of contemplative worship and prayer that allowed everyone time to breathe and rest in God’s presence.

Bryan Johnson facilitated the group in a fun afternoon of reconnecting and “getting-to-know-you” activities using games and small prizes. Each activity was simple and showed attendees ways they can become more effective leaders by using icebreakers and creative games for small and large groups at the conference and in churches.

Saturday morning began with a time of centering and prayers and then Joni Mardesen and Karen Dungan moved into discussing the issues and tasks at hand.

The first topic was the Field Outreach Ministry team, now that it consists of six members instead of eight, and how to restructure that in the coming months. This included discussing how the Healthy Church Initiative process and churches will be affected by the restructuring of the FOMs. The group used the Six Thinking Hats method, developed by Edward De Bono, to help move quickly through the discussion. One of the benefits named in the group discussion was that ultimately leaving two FOM positions vacant has given the conference the opportunity to rethink and restructure that position.

The next topic discussed was the Director of New Faith Communities Director position that is currently being advertised. Joni Mardesen shared how the interviews were going and talked about how the newly created position would be structured.

Lastly, the group went over ways to integrate the Wildly Important Goal (WIG) conference-wide—that every church in the Iowa Annual Conference will develop a process for intentionally forming disciples of Jesus Christ by the year 2020. Ideas were formed on communication strategies for the WIG and looking into how other conferences carry out their goals.

The retreat concluded with communion and prayers led by Bill and Sheri. Collectively, as leaders in the Iowa Annual Conference there is plenty of challenging work yet to be done. The retreat laid a fresh foundation on how to work together as a team to accomplish the conference’s mission and vision.