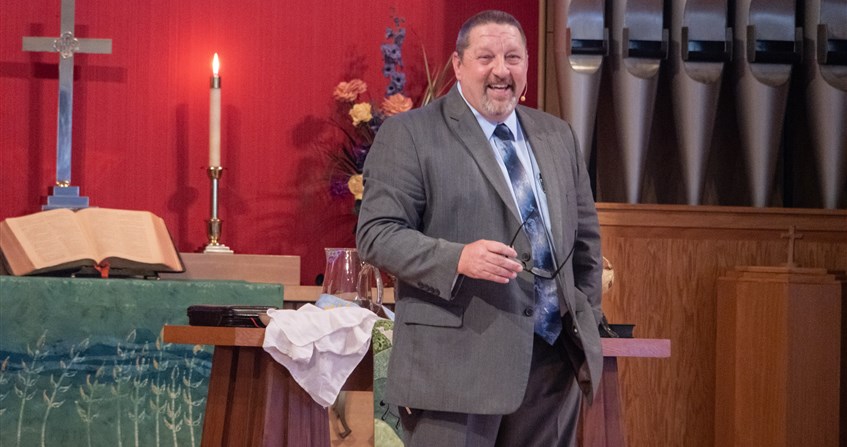 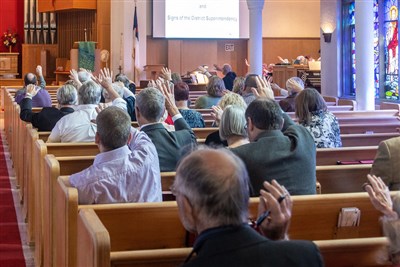 Lay and clergy of the Southeast District celebrated the installation of Rev. Douglas Cue as their new Superintendent on Sunday, October 13. Gathering at First United Methodist Church in Mt. Pleasant, the significant presence in that congregation’s sanctuary vocally expressed the commitment to “put one foot in front of the other and lead with love.”

Bishop Laurie Haller asked the community, “Are you ready for the journey?” Together they declared, “We are ready! We gather as the people who are called United Methodists and in one strong voice we say, ‘Send me!’”

Introducing Rev. Cue as the Southeast District Superintendent, Bishop Laurie remembered, “I first met Doug in the fall of 2016 when I came to Iowa to serve as your episcopal leader. I was impressed, from the beginning, the very professional way Doug handled very sensitive issues, particularly in his role as president of the Conference’s Board of Trustees. He has been an effective pastor in several different settings, for many years. Doug has a beautiful spirit!”

In installing Rev. Cue as Superintendent, Bishop Laurie noted, “You have been appointed to be among us for the ministry of Word and Sacrament; and called to a special ministry of supervision and leadership. You are called to guard the faith, to seek the unity, and to exercise the discipline of the Church, and to supervise and support the Church’s life, work, and mission.” She then asked, “Do you affirm your commitment to these ministries in our midst,” to which Rev. Cue responded, “I affirm my commitment to these ministries.”

Turning her attention to the gathered community Bishop Laurie said, “Sisters and brothers in Christ, as a people committed to participated in the ministries of the Church by your prayers, your presence, your gifts, your service, and you witness.” Responding to the invitation to “support and uphold Doug in these ministries,” they responded, in one voice, “We welcome you. We celebrate your appointment to the Southeast District. We affirm your leadership. We pledge to you our support in our mutual ministry in the name of Jesus.”

Representatives from across the district presented Rev. Cue with signs and symbols of the superintendent position. Among the items were a Bible; Hymnal; Book of Worship; stole; Book of Discipline; bread and cup; towel and basin; and a globe. 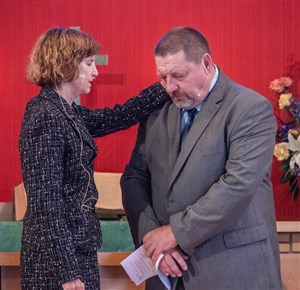 In the course of his sermon, which was entitled “Provision/Perspective/Purpose,” Rev. Cue described life as like a puzzle, quoting Romans 8:28 — And we know that all things work together for good to those who love God, to those who are the called according to His purpose.

“A lot of pieces, a lot of parts, you try to fit them together and fix them and manage them,” he said. “But that is life is it not? Whether you’re a district superintendent, a local church clergyperson, or a local church layperson. Whoever. However. God is calling you to be...How you handle those pieces says something about who you are.”

Rev. Douglas C. Cue was ordained Deacon in 1988 and Elder in 1993. An endorsed Transitional Intentional Interim Ministry Specialist, he is trained in the areas of conflict resolution and the dynamics of family systems theory in the local church. He has served six congregations including, most recently, as lead pastor of First United Methodist Church in Boone. Doug is married to Jodie Cue. They have two adult children.