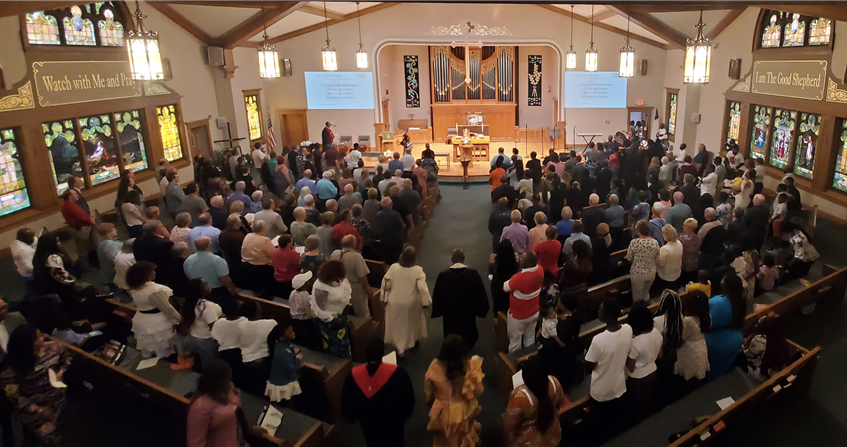 “I feel the spirit of Pentecost with us this afternoon!” shared Rev. Dr. Michel Lundula, during the August 14 installation service, celebrating the start of his ministry as District Superintendent of the Camp Clear Lake district of The Iowa Conference of The United Methodist Church.

View an album of images from the service

“Because you are part of the Church, God has a mission for each one of us … The transformation of the world begins with the recognition of the mission that the Lord has given each one of us … Open your heart that the Spirit of God will continue to guide you, and by doing so, we will transform the world in the same way that the disciples did on that day of Pentecost.” 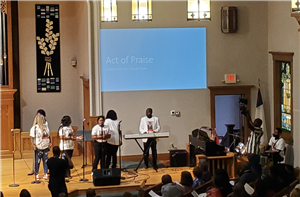 The Storm Lake United Methodist Church hosted a full afternoon and evening of celebration. The day included songs of praise by the French Ministry Praise Team, congregational songs, Bishop Deborah Kiesey leading a covenant service, laity and clergy of the district presenting symbols of the superintendency, an offering for the Okoboji United Methodist Camp, a message from Rev. Lundula, a celebration of Holy Communion, a heartfelt blessing by Retired Bishop David Yemba of the Central Congo Conference, and a joy-filled reception following the service. The Acts 2 scripture reading seemed fitting for the day—a powerful, Spirit-filled day of celebration and a call to ministry.

In her covenant service, Bishop Kiesey charged Rev. Lundula, “You are called to guard the faith, to seek the unity, to exercise the discipline of the Church, and to supervise and support the Church’s life, work, and mission.”

Likewise, Bishop Kiesey invited all others to ministry by asking, “As a people committed to participate in the ministries of the Church by your prayers, your presence, your gifts, and your service, will you support and uphold Michel in these ministries?”

Beth Carlson remarked, “I loved the symbolism of the water being brought to Rev. Lundula from all around the Camp Clear Lake District. You couldn’t leave without feeling the spirit”

Video highlights from the service may be viewed on the MinistereFrancophone de SiouxCity Facebook page.

Rev. Lundula is married to Berth Kayembe Lundula, who is also a pastor in the Camp Clear Lake District. They have four children John (15), Nancy (13), Benjamin (10), and Lucie (8).

Rev. Lundula did his primary and secondary education in the Kananga area and graduated from ITK Katende High School in 1991. He attended the Kananga Teacher's College (today, the Pedagogic University of Kananga), where he graduated with an Associate Degree in Biology. In 2001, he left the Democratic Republic of Congo to attend Africa University in Mutare, Zimbabwe, where he was involved in the Africa University and Praise the Lord Choir, Fairfield Orphanage, and graduated with a Bachelor of Science in Agriculture and Natural Resources.

In 2005, with the support of Marge and John Schenk, Michel made it to come to the United States to pursue his seminary education. In 2008, he graduated from Garrett-Evangelical Theological Seminary with a Master of Divinity, then in 2013 with a Doctor of Ministry.

Rev. Lundula received Jesus Christ as his personal Lord and Savior at his younger age, with the support of his parents, Joseph and Lucie. He was ordained in 2009 in Ames, IA as an Elder in the United Methodist Church. Before coming to the United States, he served as the youth and choir leader for several years in his home church of Kamayi United Methodist Church in the District of Kananga of the Central Congo Conference, evangelist in Rhema Missionary Center in Kananga then in Pentecostal Church of Congo in Kinshasa.

Together with the support of the African Community of Sioux City, including his wife Berth Lundula, he started the French Ministry of Sioux City and Le Mars which continues to make a difference in the Siouxland community.

In addition to serving local churches, with his ability to speak six languages, Rev. Lundula served as an interpreter at General Conferences of the United Methodist Church in 2008, 2012, and 2016. He is an Adjunct Faculty at Morningside University and Affiliated Faculty at Sioux Falls Seminary under Kairos University. He is a board member of Compassion Educational Pursuits, a non-profit organization that helps children who live in poverty in the Democratic Republic of Congo to pursue their educational dream. He also served as the Vice Chair of the Iowa Conference Commission on Religion and Race (CORR).

His passion for cross-cultural/cross-racial leadership led him to be part of the Iowa Conference Licensing School, where he taught a Cultural Competence class for several years until he was appointed to the district position. Together with his wife Berth, they have a strong passion for local and global missions.

We are pleased to welcome our new District Superintendent of the Camp Clear District, Rev. Dr. Michel Lundula.