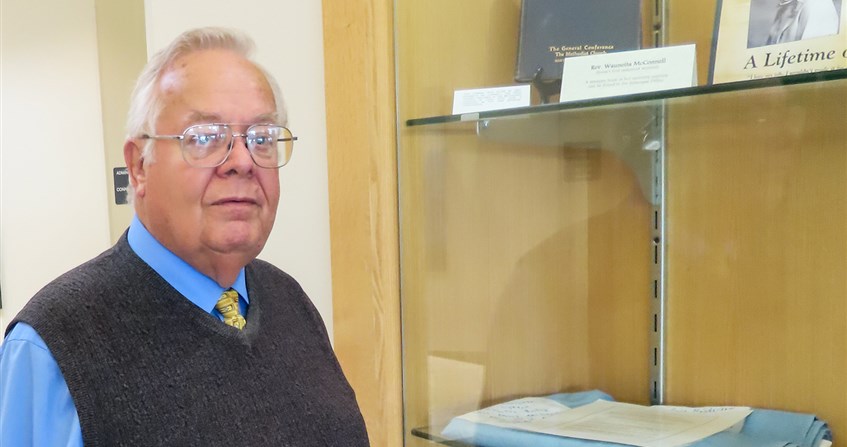 “I would remind people of what I consider one of the truisms of being a human being: if you don’t know where you’re coming from, you are not going to know where you’re going. Our history informs our future, very much,” says Rev. Jim Morris, who believes that this is why it’s important to maintain an awareness of the heritage and history of the Methodist movement.

A retired United Methodist pastor of the Iowa Conference, Rev. Morris was recently presented with the Distinguished Service Award from the General Commission on Archives and History of The United Methodist Church. While he seems modestly surprised to be in the good company of past winners, it’s really no wonder at all given his decades-long commitment to UMC history.

It all began for him back when he was attending Iowa Wesleyan College and doing work-study to pay for school. “One of the things I was to do was to care for the archives of the Annual Conference, which were at that time housed in an excavated part of the old library. It was marked primarily by pools of water and boxes up on old pallets,” remembers Rev. Morris. “I took care of that for a couple of years, and became interested in what was there by working with all that stuff and trying to keep it dry.”

His role in preservation soon became about much more than keeping boxes dry, though, when Rev. Albea Godbold, who was to become the first general secretary of the General Commission on Archives and History, made a visit to Iowa Wesleyan. Asked to present a paper during the visit, the student Jim Morris made an impression on Rev. Godbold. “For some unknown reason he took a liking to me,” Rev. Morris recalls. “He asked me if I would want to be on anything that had to do with archives and history in the future—and I said as long as it leaves me time to be a local pastor, that was fine.”

Rev. Morris went on to serve first as a youth member of the General Commission on Archives and History, then a regular member. But even before taking on those responsibilities, while still at Iowa Wesleyan, he made a lasting impact on the archives at a time when the college was making plans to build a new library.

“I happened to be in the right place to suggest that in the new library they reserve a space for archives and history—both the college and the Annual Conference,” Rev. Morris relays. “That’s what lifted us out of the mud, and I like to think I had a little bit to do with that happening. So now if you go down to Wesleyan, you’ll find a very nice archives, with humidity, light and temperature control, and a very excellent facility.”

Rev. Morris has valued his work in preserving and showcasing the history of the church, which demonstrates “a heritage that goes back to before the foundations of Iowa as a state.” But he has always thought of it as more of a “sideline,” with his primary focus being his pastoral work.

It’s his calling from God that has always been most important to Rev. Morris, and his efforts in honoring church history has been a beautiful part of that larger tapestry. “It’s been a joy to do, and I’ve always enjoyed it,” he says.

Interestingly, though, Rev. Morris began as a pre-med student, majoring in chemistry as an undergraduate. “I was accepted at the medical school at Iowa City to become a doctor—and the Lord interfered. I think that’s the best way to put it. He said, ‘I’ve got something else in mind for you.’”