River of Life—five years in 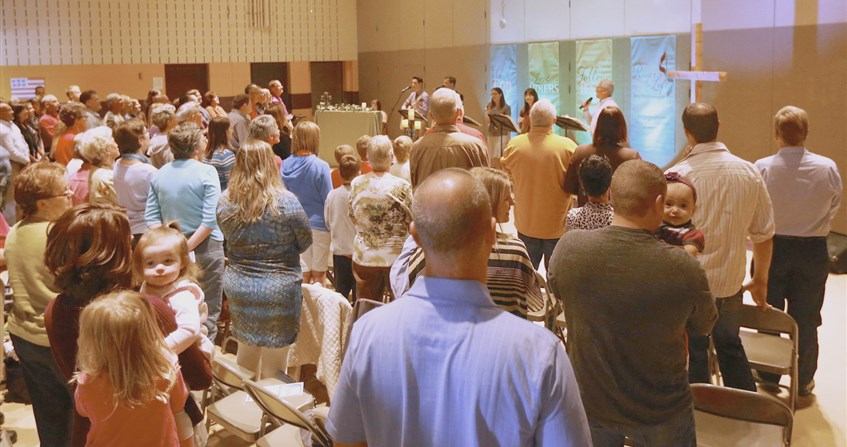 February 09, 2017
share
Five years ago, Pastor Craig Ferguson was commissioned with starting a new church in Johnston. Through New Hope United Methodist Church, Johnston River of Life was formed. As Ferguson and members of the faith community look back on the past five years, one thing is abundantly clear: Johnston River of Life is truly living out its mission of “Christ in Community.”

“It’s been five years, and we have had a lot to celebrate,” said Ferguson. “The ways we’ve integrated in the community has been really powerful.”

​The church isn’t a typical church with a traditional building, rather, they meet at Beaver Creek Elementary School in Johnston, a suburb of Des Moines. The unique situation of River of Life has allowed the church to connect with the school district and beyond, said Dave Beason.

Beason joined River of Life because of his job with the Johnston School District. He was the district’s energy manager and part of his duties included traveling to the district’s school buildings at different times during the day and night and on the weekends. During his Sunday rounds, he always noticed the River of Life worship services.

“The music and excitement always caught my attention,” he said. “So I would stand out in the hall and get my fill of Sunday morning hymns.”

Eventually, Beason brought his wife with him to attend services, and they have been members ever since. Beason said what attracted them to River of Life was the message of being Christ in the community.

“That is always what I thought churches should be,” said Beason. “I felt so many of the other churches weren’t doing enough.”

As Beason and his family became more involved with River of Life, Beason and another church member thought it might be beneficial to use Beason’s school connections to live out the church’s mission. Having worked for the district for 30 years, Beason approached the principal of Beaver Creek Elementary to see how the church could help students and families in need.

“People think of Johnston as a very wealthy community,” he said. “But we also have the very opposite end of the spectrum.”

Johnston is home to a large refugee population, with several from Sudan and the Congo. Many of these families often come to Iowa with little to their name. The school district pointed out a need for winter clothes for children in the district. The church responded to the call and helped provide clothing for the children who needed it most.

A group of refugee women recently expressed an interest in improving their English and River of Life once again answered the call. The church members are gathering volunteers to help run a six-week ELL course for 17 women.

Recently a teacher at Beaver Creek mentioned she’d like to create a sensory garden for students with disabilities. The church members have stepped up and are working with the teacher to get the project going.

The church also helps the community outside the school district. Over the last five years, River of Life members have created a youth coalition; held Beggars Night activities for more than 300 children; gone on mission trips to Honduras and Detroit; built homes for Habitat for Humanity, and helped fix up homes for friends and neighbors of church members.

“(Attending River of Life) has created a feeling of wanting to serve,” said Mark Scherer, a long-time church member. “If you look around, everyone is doing something (for the community).”

Wendy Musgrave was a member of River of Life from the beginning. She said she and her family were first drawn to the church because of its outreach to the community.

“I was first drawn in because of the fact that we weren’t just keeping ourselves inside our walls,” she said. “Our purpose was to reach out into our community and connect to people who didn’t belong to a church or never belonged to a church.”

Because of this outreach to people not connected to a church, Ferguson said several of River of Life’s worshipers are those who are “unchurched” or “dechurched.” Musgrave said the connection to people who are often looked over keeps her family coming back.

“We wanted to be involved in that,” she said. “We keep coming back because we have a great sense of community, it’s like a family.”

Musgrave’s involvement with River of Life opened a door to a new calling in her life. She is planning to pursue a call to ministry. And she isn’t alone. According to Ferguson, three people are in school for lay ministry, and he is sending out a new elder. He acknowledges the success of River of Life lies in the continual community outreach and bringing the word and light of God to others.

“We’re raising up leaders who are engaged in their community,” said Ferguson. “It’s powerful to see people re-centered on God and their communities.”

For more information on River of Life, visit http://www.johnstonriveroflife.org/.