Saving Starfish—Making a difference in the lives of young immigrants, one by one 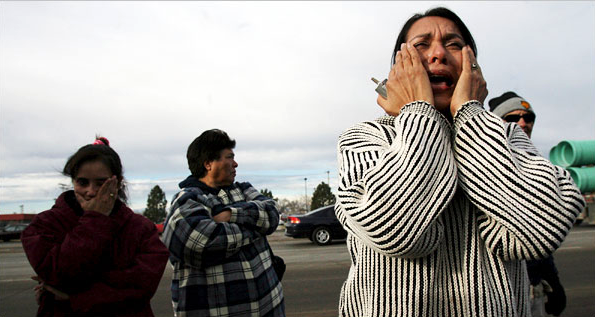 Over 1000 U.S. Immigration and Customs Enforcement (ICE) and other federal agents, heavily armed and wearing full SWAT gear, executed the largest workplace raid in U.S. history in Postville, Iowa on May 12, 2008. Nearly 400 immigrant workers at the Agriprocessors kosher slaughterhouse and meatpacking plant were arrested.  Within four days, some 300 of them—mostly Guatemalan—were convicted on document fraud charges. The majority served a five-month prison sentence before being deported.

Families were ripped apart. Many who were not caught in the initial raid fled the area, cutting the town’s population of 2,273 almost in half. The raid—which cost the U.S. taxpayer more than 5 million dollars—devastated the local economy. It also devastated the people—both immigrant and native-born—who lived in the area.

“It deeply affected me because they were—are—my friends,” says Kathi Mitchell, co-coordinator of the Iowa Justice for Our Neighbors clinic in nearby Decorah. Her usual cheerful face grows cloudy at the memory. ”And also it was very unjust,” she adds quietly.

A one-on-one aide at an alternative school, retired social worker, former dairy farmer, passionate volunteer, and self-described “eccentric workaholic,” Kathi lives life with unbound energy and enthusiasm for people. She is not one to sit down and flap her hands when there are people who desperately need her help.

“Social justice to the core,” she admits, with a broad grin.

Kathi had long been involved in immigration justice issues through her church, First United Methodist of Decorah. Other churches joined in to help the immigrants still living in the community, among them several underage immigrant workers—some as young as 15—who had been given U-Visas for their assistance in prosecuting their former employers.

Kathi and her colleagues quickly set up a micro loan fund to help people pay their legal fees. But an even bigger priority is to have a lawyer who knows the intricacies of immigration law—and the closest immigration attorney in Northeast Iowa was two hours away. Iowa JFON, however, was already operating five other clinics throughout the state. Decorah became the sixth.

While the JFON clinics are held at First United Methodist, Kathi’s co-coordinator, Ruth Palmer, is from St. Benedict’s Catholic Church. Staff and students from Luther College provide additional volunteers and funds. It’s a true interdenominational effort and a model Kathi recommends to other groups who feel called to the immigration ministry.

“Together you can do so much more,” she advises. “I would not have been able to do this with just our congregation.”

They are uncle and nephew, but with only three years between them, the boys are more like brothers. Together they escaped the killing streets of Guatemala, survived the perilous journey to the border and made it to Iowa, where they were reunited with Alex’s mother and Javier’s sister, Graciela. But would they be allowed to stay?

With the help of Iowa JFON immigration attorneys Ann Naffier and April Palma, Alex and Javier applied for Special Immigrant Juvenile Status. Because Graciela is herself undocumented, Ann advised that the boys needed an official guardian who was also a U.S. citizen.

Kathi lost her only daughter in infancy. Such a terrible loss can crush the strongest among us. It led Kathi to instead dedicate her life to working with other mothers’ children. She immediately raised her hand.

As their guardian, Kathi says, she sees the boys once or twice a week, stays in contact with their high school, and gets them to their various appointments. She cheers Javier at his football games—he’s very good at American football—and encourages Alex’s interest in art.

Characteristically uncomfortable with praise, she shrugs off her role in transforming the lives of these boys. “They are very self-motivated young men,” she says proudly, and then shares her worries about the other teenagers in her JFON orbit; the two girls who were sexually abused on their way here; the boy who contracted typhoid; the kids who experienced significant psychological trauma in their home country and need counseling. The fate of one young man—soon to have his 19th birthday—seems to gnaw at her the most. “I’m afraid he will be deported,” she says sadly, “and that he will be killed.”

Alex and Javier, meanwhile, are waiting for their green card. Their world is opening up for them in ways they couldn’t have imagined back in Guatemala. Back home, they just wanted to stay alive. Now they have a future.

That future is very much on Kathi’s mind. “I want to make sure that these boys continue to excel in their studies at school and then start thinking about what we can do to make college connections for them. And then…” Kathi smiles with her whole face.  “…and then I start on the journey again with another teenager!”

Kathi, a JFON volunteer of remarkable strength and stamina, referenced the Starfish Story when she spoke with us last month. Originally told by author Loren Eiseley, there are many versions of this story, but they all tell the same truth: