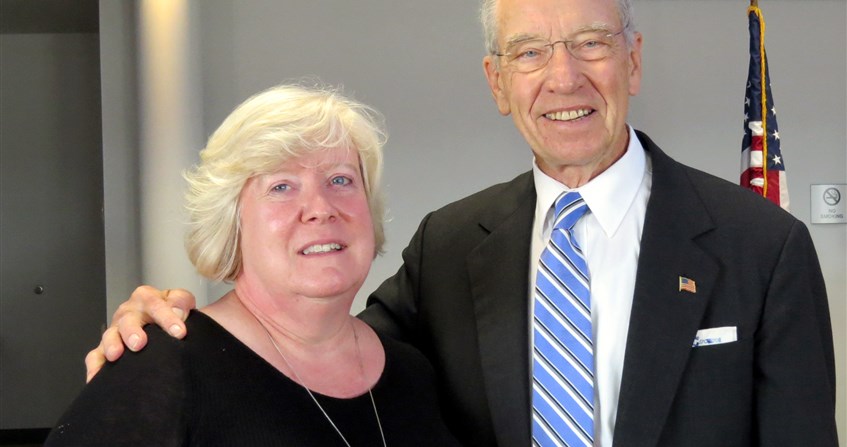 The Rev. Lee Schott pastor at Women at the Well spoke about the need for passing federal criminal sentencing reform legislation at a news conference Wednesday with U.S. Sen. Chuck Grassley from Iowa and U.S. Sen. Tim Scott from South Carolina.

Women at the Well is a United Methodist congregation located within the walls of the Iowa Correctional Institute for Women, in Mitchellville, Iowa,

"Criminal sentencing reform is a step forward to healing wounds by closing some disparity in sentencing guidelines that disproportionately affect African Americans and other minorities and helping people already in the prison system to become healthy members of society," said Sen. Grassley. The Sentencing Reform and Corrections Act is authored by Grassley and Co-authored by Scott. It responds to Iowan's concerns about the increase in federal prison population, costs of incarceration, and that some people who have minor criminal backgrounds receive lengthy sentences intended for hardcore criminals.

Rev. Schott said that she works with a significant number of women in her church who have experienced the inequities in the system, and now their lives and communities bear the burden of the disproportionate impact from the federal minimum mandatory sentencing laws.

"This work is really personal to me," said Rev. Schott, "because I spend a lot of time getting to know women whose potential, whose families and whose lives are unnecessarily damaged by the federal and states mandatory sentencing."

In 2015, Rev. Schott was one of 130 faith leaders who signed a letter to Sen. Grassley asking him to allow legislation to move forward in this area. She expressed gratitude towards Sen. Grassley and Scott for taking the lead on getting the Sentence Reform Act on the table.

"I urge you both," expressed Rev. Schott, "to continue your important work and to exercise the influence that both of you have to get this bill passed and signed into law."

"And always remember that behind all of this are human beings with faces, and stories, and familes—precious children of God—inspite of what they have done to get into this place. And so many of these people long to and are ready to make a fresh start as valued citizens of this great country."