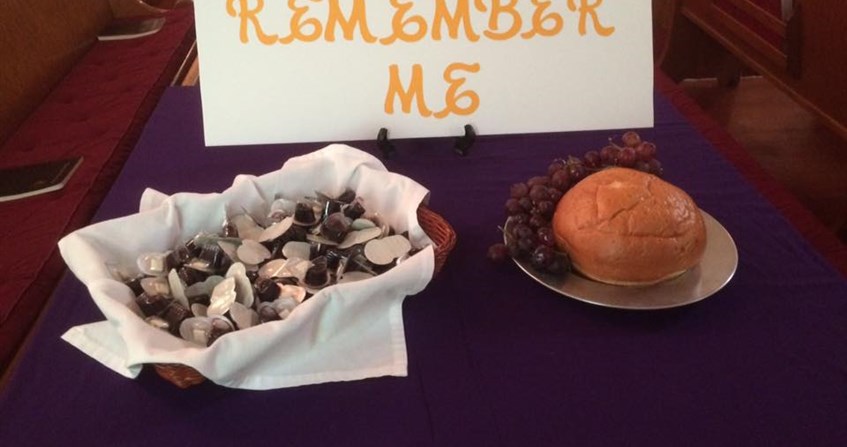 To be able to walk where Jesus walked during these final days of Holy Week would be a once-in-a-lifetime experience. One church in the Southeast District is offering the next best thing: an interactive walk through the scenes of Jesus’ last days before the Crucifixion. 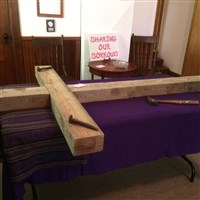 On Good Friday, April 14, from 8 am to 8 pm, the Donnellson United Methodist Church will host its Walking the Last Days of Jesus event in its sanctuary.

“I wanted to give the churches that I serve the experience of walking where Jesus would have walked,” said Peggy Ellingson, pastor of Donnellson UMC Embury UMC.  “Since I couldn’t take them to the Holy Land, I think this was a way they could experience Holy Week versus a (worship) service.”

The walk is made up of interactive visuals that symbolize different components of Holy Week. At the first station, participants write their hopes and dreams on a palm leaf, symbolizing Jesus entering Jerusalem on what is now Palm Sunday. The second station symbolizes the washing of the disciples’ feet where participants wash their hands. Next is a Communion table. Instead of an open cup and loaf of bread, Ellingson found self-enclosed cups and blessed them for participants beforehand. The next station is set up to look like the Garden of Gethsemane, where Jesus prayed and wept. The altar is surrounded by a variety of green plants, giving the visitor a chance to sit in quiet and in prayer as Jesus did.

“People can go and sit within the plants and reflect in a quiet space,” said Ellingson. 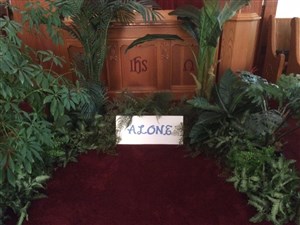 The last two stations are especially powerful because they symbolize the Crucifixion and the Resurrection. At the Crucifixion, a participant can write their sins or worries on a piece of paper and nail it to the cross. The final station is made to look like the tomb. Ellingson found a piece of material that looks like stone, and she set up the stone table and cloth. A basket is filled with rocks for people take to remind them of the tomb and the rock that was rolled away.

At each station, participants read a Scripture passage describing what is happening. The participants also receive a booklet at the start of the walk with a small prayer for each station. It can take anywhere from 20 minutes to two hours for people to walk the whole journey.

“This is a very self-guided tour so they can take their time going to each station and stay as long as they’d like,” said Ellingson.

Ellingson had been to the Holy Land herself in the past and walked where each of the stations represents. She knew she had to bring the same experience to her congregation so they could feel the Easter spirit.

“I was brain-storming with my ministry assistant Carolyn Pundt, and I shared with her what I hoped to give the churches I serve,” she said. “I had a vision of what I wanted it to look like and what station was supposed to do.”

Ellingson knew she wanted to use the sanctuary and narthex, but was unable to move the pews. She also wanted to give space for people to sit and reflect if they chose. So, with the help of a trustee board member, they build 3x4 foot platforms that would lay over the back of the pews in the sanctuary.

“We didn’t want the aisle blocked, so it was safer,” she said. “We also wanted a place if people needed or wanted to sit down or spend more time at a station, they could sit in the pew right behind it.”

After creating the space for the stations, Ellingson had to bring her vision to life. With the help of Pundt and her church member Nancy Fett, she got to work on pulling together the resources to create the Holy Land.

“We found that most of the creative people wanted to help flush this all out and put it together, so it flowed,” said Ellingson. “Nancy (Fett), Carolyn (Pundt) and the creative folks really helped make this a reality.”

Once the stations were set, Ellingson recruited volunteers to host the event. Hosts and hostesses rotate in every hour for the 12-hour day. They greet the visitors, give them booklets and share how to interact with each station.

“Something I never imagined.”
In 2016, Ellingson tried the first Walking the Last Days of Jesus, which turned out to be a huge success.

“In two years, it’s become something I never even imagined,” said Ellingson. “It started as this small little vision for the two little churches that I serve and who knew what could happen.”

Ellingson and her congregation decided to open the doors of the church for the event for 12 hours to accommodate retirees, working families, students and everyone in between.

“The idea was to give people the chance to come during the day or after supper, whenever is most convenient for them,” she said.

That timeframe ended up benefitting the event and those who attended. Many of the church members who attended earlier the day asked if they could bring friends and family later on in the day. This year, the excitement seems to have only grown.

“This year people were asking if we were going to do this again,” she said. “Now we’re talking vanloads of people that are telling me they’re going to come because they want their friends and kids to experience this.”

The event isn’t about large numbers of people, though, Ellingson hopes the walk will ultimately help feel more connected during Holy Week.

“It’s really to give folks an opportunity to come and experience this together,” she said.

Walking the Last Days of Jesus will be held at Donnellson UMC, 221 University St., Donnellson, Iowa, from 8 am to 8 pm on Friday, April 14. The event is free and open to the public.