Dawson looks to 'See the Global Church in action' 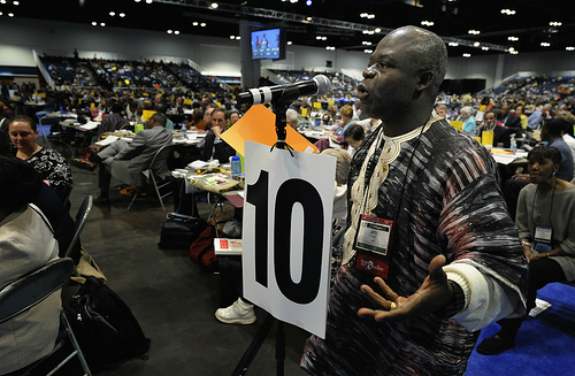 February 03, 2016
share
Rev. Katie Dawson, a member of the delegation to the 2016 General Conference in Portland, Oregon, is honored to have been re-elected by her fellow clergy to represent Iowa. She is also cognizant and appreciative of the fact that the first two clergy delegates to be re-elected were in fact both women. “And we represent diversity in age and in ethnicity, and I think that really represents who we are as Iowa well.”

Click here to listen to the conversation with Katie.

This diversity among the delegates represents a change from the traditional and will perhaps be the hallmark of a newer era.

The delegation has had a few meetings so far. “We’re meeting again in March, and part of our process is looking forward to jurisdictional conference, where we will be electing four bishops. So some of our work has been discerning as a delegation if we want to put a nominee forward for that,” notes Rev. Dawson.

“Now that we have the legislation in front of us, we’ll have a chance to really dive more into some of that. Each person who’s assigned a section will be doing a kind of presentation about what’s important that’s coming up. So even though each of us focuses on our particular section, we all have to be aware of the entire material scope that’s before us.”

She is excited about the material that she is responsible for covering. “My focus is faith and order, and the bulk of that is really how we order the church,” says the reverend. “There’s a lot in that section that really talks about who we are as United Methodists and what that means.”

Rev. Dawson is especially intrigued by some of the proposals on how they might create a general Book of Discipline that allows for some latitude within conferences. “I’m looking forward to solutions that will help us remain united in what’s essential, and but also provide some flexibility to be in ministry where we are.”

The idea would be for a book that represents the breadth of who the United Methodist church is worldwide, while allowing for some contextual uniqueness in particular settings within that. “I think that contextual uniqueness is really important. Because the church in Uganda is not the same as the church here.”
The reverend confesses to being both hopeful and cynical at the same time over what’s to come at the General Conference. “I have a lot of hope that we can accomplish the things that we hope to, and we can do so in a respectful manner. But I also witnessed last time that we kind of worked on a lot of things, and then it just didn’t happen. And we got to the point where we couldn’t agree to disagree,” she admits. “Or, that we made some changes, and then all of that work was ruled invalid by the judicial council.”

At the last General Conference, Rev. Dawson proved to be an asset in getting some of her fellow delegates connected in terms of social media, earning herself a reputation as the “Twitter maven.” She does recognize that there can be a negative side to online discussions. “Twitter and Facebook and social media really have the ability to bring out our worst angels sometimes. There can be some snarky-ness and we can express frustration that way. Sometimes that is a good outlet, and sometimes we need to watch what we say and do no harm.”

But she’s also well aware of how useful it can be at a place like the General Conference. “When you’re in a room that has 1,000 delegates, you can still be connected and have conversation,” she explains. “You can ask for information and say ‘What paragraph is that referring to?’ and you get 10 answers immediately. So there’s some real benefit. I’m also aware, though, that the ability and the privilege of having that kind of access also means that, when not everyone has that kind of access, it’s almost like two different playing fields.”

For that reason, she feels it is important for those who are in tune with social media to reach out to colleagues and help them utilize it, so everyone can share in its benefits together.

As the delegation wrestles with all of the material that they will have to cover, Rev. Dawson is hopeful that they will be able to find ways to move forward in the midst of some of the more divisive issues at the General Conference. Whatever challenges lie ahead, she is anxious to see the worldwide church at work: “One of the things I’m really looking forward to is seeing that global church in action again.”