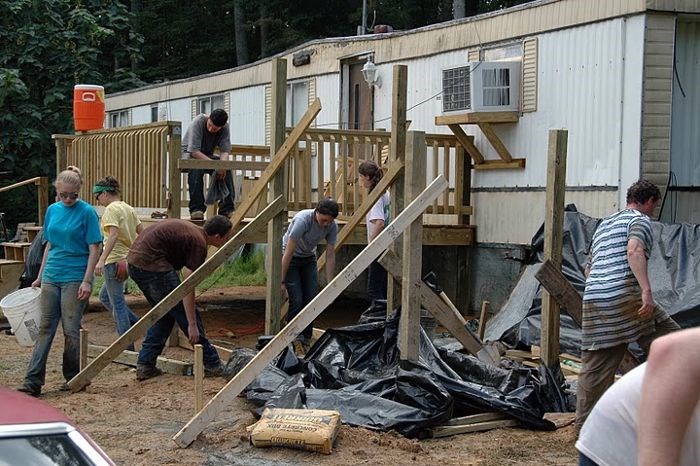 Sometimes, it’s easy to feel forgotten. Small, rural churches in Iowa can sometimes feel like they’re on the brink of closure, forgotten by their communities. In the US, some communities even feel forgotten, stuck in time as the world flies past them. That feeling is sometimes what brings communities together.

Webster United Methodist Church in Eastern Iowa employs a less-than-full-time pastor. The rural church, though small, continues to be mighty and fights on for its survival. The church’s youth program, which is open to any child in the school district no matter denomination or faith, was inspired to help communities often forgotten by the modern world, Appalachian communities.

“(The youth group) has done many local mission efforts,” said the Rev. Dr. Charles Klink, a retired United Methodist pastor leading Webster UMC. “But when the seed was planted of venturing to one of the poorest sectors of our country, they became inspired.”

Due to outmigration and loss of jobs to mechanization, the Appalachia region has struggled with poverty for many decades.  As of 2010, the Appalachian Regional Commission still lists 82 counties in the region as distressed.

That is where the Appalachia Service Project (ASP) comes in, said Klink. ASP was started in 1969 by Rev. Glenn “Tex” Evans, a United Methodist minister. Evans served as director at the Henderson Settlement in Frakes, KY, where he recruited 50 teens and adult volunteers to help repair a home.

Klink experienced ASP in its early years. He was assigned his first parish in 1979. During that assignment, he took a trip to help ASP and has continued serving every since.

“I’ve always had a love for ASP,” said Klink.

Klink loved ASP so much, his family started volunteering with the organization. That love also transferred to the youth group at his part-time assignment.

Small but mighty
In all denominations, small, mostly rural churches tend to have a “survive until we close” mentality, said Klink. Often times, that ends up being the case, whether it takes months or years. Recently another denomination’s church closed down in a neighboring community. The Webster UMC, though, continues to persevere, despite having a part-time shared pastor.

“We won’t even talk about (the possibility of closing),” said Klink. “They’re the only game in town for their community, so there’s no need to talk about the what ifs.”

The church continues to be a rock within the community it serves, even reaching out to members of the recently closed neighboring church to join them for Easter services. Webster UMC is also one of the few churches will a part-time pastor that hosts a youth group. On average, about 15 to 16 youth attend gatherings.

“For a community of Webster, that’s pretty good!” said Klink. “It’s a community youth group, so anybody and everybody from the school can attend.”

When Klink was assigned to this position two years ago, he suggested that the youth consider a mission trip. This year, without any prompted, the youth said they wanted to go on a trip with ASP.

Immediately the youth started looking for ways to raise money for a trip. The youth helped people in the community with light household tasks like washing windows, raking leaves or gathering fallen tree limbs. They recently held a spaghetti dinner where a community member presented them with a $500 check. The youth raised $1,000 in total from the spaghetti dinner.

The student’s easiest and biggest source of funds for the trip is pop can and bottle redemptions. The youth collected cans and bottles from their homes and their communities. They have raised about $700 from the can drive, which can support three to four youth for the trip with ASP.

The Webster UMC youth won’t be going on the trip alone. Pastor Barrie Tritle at Iowa City First United Methodist Church will take a group of 40 to 45 people to Appalachia and the Webster youth will ride along.

“There is that connection of going with a large group,” said Klink. “They won’t feel like they’re the only ones.

ASP hosts 26 centers across Kentucky, North Carolina, Tennessee, Virginia and West Virginia. The Webster youth will most likely go to Kentucky for their mission trip. The bulk of ASP’s efforts are to provide “warmer, safer and drier” homes to families in Appalachia. According to ASP’s website, 393,643 volunteers helped repair or build 17,866 homes.

Klink said over the years he has helped ASP, he and his parishioners have helped rebuild homes, but also connected with the people of the region. In the past, Klink and church members helped rebuilt a trailer in West Virginia.

They team put in a new bathroom, secured the undercarriage of the trailer and fixed the roof.  The man lived about a mile from a church that still practiced snake handling. Klink discovered the man’s business was catching snakes that came down from the mountain at night and sold them to the church.

“That’s how isolated the people can be in Appalachia,” said Klink. “His only means of income was to catch the snakes and his only shelter was his trailer, he had nothing else.”

Klink’s granddaughter’s experience was one to remember as well. She was with a team renovating a woman’s house. The team was tearing out the old walls to replace them. As his granddaughter pulled one wall away, she found a wedding ring. The woman who owned the house thought she had lost it forever 10 years prior.

“You can’t buy moments like that,” said Klink. “That is something my granddaughter will remember forever.”

Klink hopes moments like these will remind the youth of Webster UMC even though they might be small, they can always help others and spread the love of God.

“They do the fun stuff, but they make sure this is tied into why we are always doing this,” said Klink. “For the leaders, it’s their entire ministry to keep their community youth group going.”