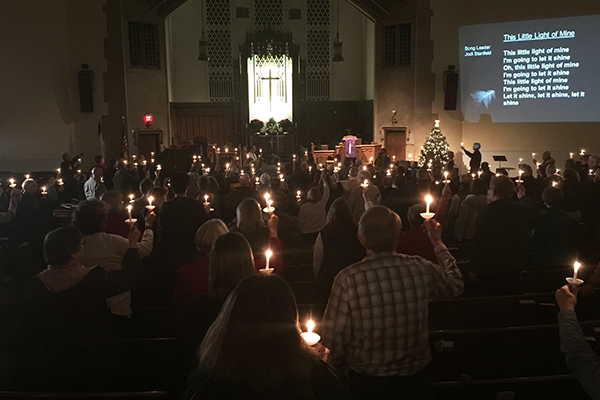 December 18, 2016
share
Protesters who have been standing strong against the Dakota Access Pipeline in North Dakota for months were rewarded with good news on Sunday, December 4, when it was announced that the Army Corps of Engineers would re-route the pipeline so that it doesn’t pass under Lake Oahe.

Many people across the country have been standing with the Standing Rock Sioux Tribe during this long fight (which isn’t likely to be over, with a new administration coming in soon), and indeed on that same day in Des Moines, Iowa, supporters gathered at Grace United Methodist Church in solidarity with a special service featuring music, dance, and prayer. Dr. David Swinton, who is pastor of Grace Church and helped organize the gathering, was inspired by his own recent visit up to the Oceti Sakowin Camp in North Dakota.

“I have to confess, I went mainly out of curiosity,” Swinton admits. “I was concerned about what was going on, but I didn’t know a whole lot about it.” He quickly learned, though, when he got there. Swinton was struck by how close the pipeline actually is to the reservation. “The camp is just right across the river and kind of in between the two, so the proximity meant a lot.”

Click to listen to the Iowa Conference Conversations with Rev. David Swinton

The community he encountered there had a profound effect on him. “Being there with Native Americans, getting a sense of the spirituality was important. And then the prayerfulness of the camp, that surprised me quite a bit. At each meeting, we had song, we had prayer; reminders to move with a sense of ceremony, not to rush around the camp; to show respect for everybody around – all of that was new to me. I was very touched by all of that.”
Native American spirituality could have something to teach us Christians. “To see it really lived out there,” he muses. “That I don’t think we Christians are so good at having, that sense of prayer and ceremony about us in our daily lives.”

During his time at the camp, Swinton ended up being present for one of the most dramatic moments of the long protest. “I was there on the night where people had gone down to the bridge over the Black Water River,” he relates. “That’s when the violence erupted, and the police really over-responded there. That lit a fire of passion in me that something had to be done, and that that situation had to change – or people were going to die. I just came away, without a doubt, that that was the case.”

The gathering at Grace Church offered an opportunity to raise awareness of the situation being faced by the Standing Rock Sioux, while also celebrating their sacred values. “Their values are raised up in the Lakota culture, and yet are values that I hope that we all have. There are values of prayer and respect, of wisdom, of speaking the truth, the values of generosity,” explains Swinton. “We found it very easy to base the service around those values and to speak from that viewpoint.”

Information was shared, including the showing of a video - Mni Wiconi: The Stand at Standing Rock about the history of the pipeline and why it is a problem, while also putting it into the context of history. “At one point, the chairman of the tribe had said ‘They leave us alone until there’s something in our land that they want, and then they always find ways to make it happen. And the cost is always so high, and we have to pay the cost,’” Swinton recalls. “Valuing land and people can become a political statement when that gets in the way of what other people want to do. So we can’t be without politics entirely in our faith. If we value people, there will be times when we’re going to have to stand up strongly for other people.”

He thinks, however, that when it comes to advocating on behalf of people in need to politicians or decision-makers, it might be better to take a positive and supportive approach. “We can call up and say ‘If you don’t do this, there’s going to be trouble, and we’re all going to organize against you!’ But another way you can say it is, ‘If you think you don’t have support for doing the right thing, let me tell you, we will support you,’” says Swinton.

“I think that can often be the message that we can offer to politicians. They think that only those who write the big checks are the ones who are gonna help them out if they go one way or the other. We may not have large checks to write, but we can help in other ways, and we all have various gifts. And we can say to those who are leaders, ‘We will stand behind you if you do the right things.’”

There was a dance presented at the service – a hula dance. “Which I’m sure was surprising to people,” adds Swinton. “But this was a woman who shared with us who is an indigenous Hawaiian person, who has participated in Native American pow-wows before as well, who was able to put it in the context of showing the stories of the land. This was a welcome dance that she shared with us, and so it expanded our view of the whole world has a stake in this earth.”

The evening at Grace Church concluded with the 300 or so people in attendance singing “This Little Light of Mine” while carrying lights out into the night.

“There was the phrase in the liturgy that we know from the Gospel of John, that no amount of darkness can put out the light, and also the fact that one little light can shine,” notes Swinton. “But oh my goodness, when we had 300 lights together, how that really lit up that sanctuary. And that’s what’s gone on with this particular issue, at least so far. We’ve seen where what started with a few voices became many more and many more – and it really made a difference. So we have to spread that out in hope and strength and feel that encouragement.”