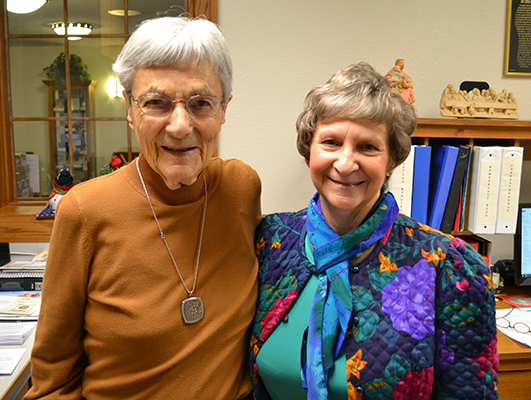 Alice Walters has seen more than most in her life. That is especially true of her church in Jefferson, a small town 45 minutes east of Ames. She’s seen members come and go, building renovations and technology bring the church into the 21st century. For her, church is her Jefferson family and she wants to support that family as it supports her.

Walters, even at 100 years old, volunteers at FUMC every morning Monday through Friday.

“Alice is wonderful because she comes daily, can keep confidentiality, is a hard worker and everyone knows her,” said Pastor Julie Paulson. “I have never had a volunteer quite like Alice.”

Walters has been a member of FUMC since 1962. She worked at the Iowa State Extension office for many years after moving back to Iowa from Texas. After Walters, left that career, she was eventually asked to become the finance secretary for the church.

“Suddenly, they needed somebody to do the books,” said Walters.

She recalled the days before computers or even typewriters were used in church offices. She quite literally had to keep track of the church’s finances in huge black books.

“Income coming in was in one book and expenses going out were in the other book,” she said.

As finance secretary, she saw the good times and bad times that come with all churches. Sometimes money wasn’t coming in, other times there was extra money. Close to 20 years ago, the church went through renovations and Walters was there to help with the finances, which she did all by hand.

“When I first started doing the books it was ink on ruled paper, sorted by accounts,” she said.

The renovations to the church included adding on a large community room. Walters is proud of the room because it allows the church to connect more with the people of Jefferson.

“A lot of meetings are held there that help the community as as well as the church,” she said. “

When Walters turned 80, she decided it was time to retire from her position as finance secretary. She thought it was time to let someone younger take the reins who had a better understanding of new technology.

“It was time to have somebody younger do it,” said Walter. “I thought somebody ought to know what’s going on (with technology).”

While Walters might have left the payroll of FUMC, she continues to serve her church as a volunteer.

“(The church) wouldn’t be the same without her here,” said Debra Blackburn, administrative assistant of FUMC for 27 years. “She’s been here every day since I’ve been here.”

On Mondays, Walters will go through the sanctuary and tidy up from Sunday service. She wants to make sure the sanctuary is tidy for anyone who wants to use it. She also helps stuff envelopes and bulletins, organize mailings, cuts and staples things for the church’s after school program, makes coffee for the office, updates attendance on the computer and edits addresses.

“Sometimes it’s hard to get everything done without Alice,” said Blackburn.

Blackburn noted Walters is fiercely independent and active outside of church as well. Walters recently passed her a driver’s test and drives herself to the church every day. She only purchased bread two times in her life, preferring to bake bread for herself and to share with the church staff. She’s traveled across the globe to learn about others’ cultures and their way of life. She was a volunteer with local kindergarten classes and a long-time Sunday school teacher. And she knits everything from hats and mittens to sweaters. Alice donates the hats and mittens every Christmas season to FUMC’s hat and mitten tree. The items are then sent to the local food pantry.

Walters said she continues to give back to her church and community because she receives so much in return. Walters has close family in Ames and Des Moines, but the church provides her a family in the town of Jefferson. Her volunteering also provides a sense of fulfillment and connection with her community

“(When you retire) you can’t just sit and look out the window, you want contact with people” she said. “And always keeping busy is the secret to long life.”