Tent witness at the Conference Center 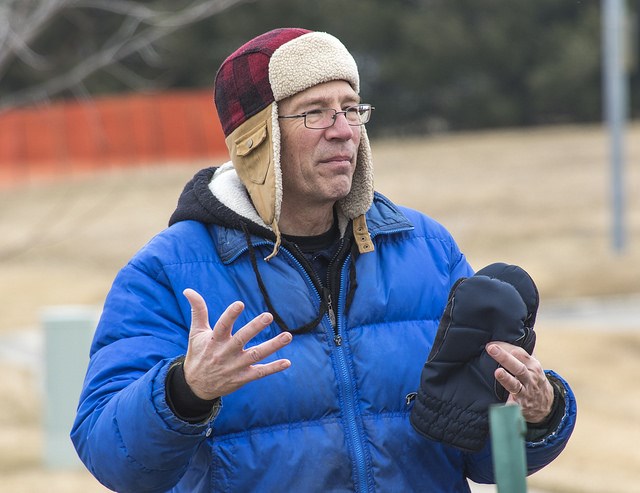 March 04, 2016
share
I Have a Feeling in My Heart That I’m Supposed to Be Persistent

On March 4, the Iowa Conference had a guest named Rev. Mike Tupper who chose some rather unique accommodations for his overnight stay – he pitched a tent out on the lawn. This was not because Rev. Tupper is an avid camping enthusiast, but rather because he’s trying to make a point.

Click here to see a photo album of Rev. Tupper pitching his tent.  Others joined him for conversation and witness.

Click here to listen to the conversation with Rev. Tupper.

The reverend is in the midst of a 175-day mission to sleep outside in symbolic solidarity with the members of the LGBTQ community who are excluded from the United Methodist Church. He began the journey three months ago, and since then has slept in his tent at annual conferences and churches in Michigan, Indiana, Wisconsin, and now Iowa. Next stop is North Carolina, and he will continue on until the General Conference in Portland, Oregon this May.

Rev. Tupper’s foray into LGBTQ advocacy first began about two years ago, when his daughter Sarah announced that she and her partner would be getting married. “I said ‘Well who will be the officiant?’” says Rev. Tupper. “And she said ‘You’re going to have to think about whether God wants you to be an officiant or to actually sign the marriage license. I want you to pray about it, Dad.’”

It was the season of Lent at the time. “I just happened to be preaching about Jesus saying ‘I’m going to Jerusalem,’ and encouraging his disciples, ‘Take up your cross and follow me,’” Rev. Tupper says, explaining that he came to the realization that signing that marriage license would be his Jerusalem. He did sign it, and it wasn’t without consequence, as his district superintendent immediately filed a complaint.

Then, just as that complaint had been resolved, Rev. Tupper found out that a fellow reverend, who most people already knew was gay, had suddenly been asked to resign. He was about to marry his partner, and Rev. Tupper, wanting to be helpful, offered to sign the marriage license. “When we got there, there were 30 United Methodist pastors there, mostly from West Michigan. 30 pastors all stood behind him on the courthouse steps,” he reports. “Just an enormous show of support for him, because we love him and we didn’t think it was right what had happened to him. And we wanted to support him at a time when he was getting married to his partner.’

Again, the district superintendent filed a complaint, and now Rev. Tupper was really thinking hard about his responsibility to LGBTQ people. Especially in light of the General Conference coming up, he wondered if there was something he could do that might actually affect the Conference. A show of true sacrifice seemed in order, but most of the suggestions that friends gave him – giving up his ministerial credentials, his pension, or starting a hunger strike – didn’t sound right.

“So I prayed about what is it that God’s calling me to do?” says Rev. Tupper. “I got to thinking about the Old Testament prophets and the crazy things they did, these symbols, and it’s like I received a vision like the prophets did in the Old Testament: I’m supposed to sleep outside as a symbol for how our church is treating our LGBTQ people, that we’ve been pushing them outside the church, pushing them out in the cold. I’m supposed to stay out in that tent.”

Where he chooses to pitch that tent is also important. “It’s like you know people have demonstrations on the steps of their capitol building, where power is. So where in our church is power? Well, it’s in our conference or area-wide offices.”

Witnessing in a Tent

His reception has been mostly positive, but varied. “Sometimes there’s lots of hospitality. Actually, the Wisconsin bishop, he took me out to dinner,” notes the reverend. “Other times, no one’s around and so you’re just out there being a witness by yourself. And that’s okay too.” When he’s been in more populated areas, people have often come by to show their support. He’s also had instances of people disagreeing with him, though they typically respect his determination.

Has he changed anybody’s mind yet? “Probably not,” Rev. Tupper confesses, then re-considers slightly. “The most change has happened with folks in my congregation. They’ve been on this journey with me, so we’ve been able to have more extended conversations with people, and I’ve seen them grow in terms of their understanding on this issue. Because the types of things I’m talking about now are not what they were taught when they were kids. So it’s required some time.”

As you can imagine, sleeping in a tent, in the dead of winter, in unfamiliar places, can be scary. “I’ve had to deal with a lot of fear along the way. When I got the vision about this, I didn’t think it that there would be that much fear involved,” he admits.

“In each place that I’ve gone to, there is this fear that I’m going to get arrested. And I really don’t want to get arrested. But, at the same time, I know that God’s laid it on my heart, that if the powers-that-be would choose to want to arrest me, that’s what I’m supposed to do. So the struggle of dealing with that fear and how to trust the Lord and continue to do what you’re called to do, for me that’s the hardest.”

He also struggles with a fear of looking foolish. “Struggling with wanting to be faithful, but not wanting to. ‘I don’t really want to look like a fool, Lord. But if that’s what you’re calling me to do, that’s what.’ And Francis of Assisi is someone that I’ve kind of been drawn to recently, just in terms of his willingness to do things that were foolish. It’s like, ‘Okay, someone else has blazed this path. If he can do it, I can do it!’”

At times his wife asks him if he’s certain that this is what God wants him to do. His spiritual director too recently asked if the fact that sometimes “not much happens” is a sign from God that he isn’t supposed to be on this mission. But Rev. Tupper responded to him saying, “‘I had this feeling in my heart that I was supposed to continue being persistent even though not much happened.’”