"Thanks be to God for the life, death, and resurrection of our beloved Bill." 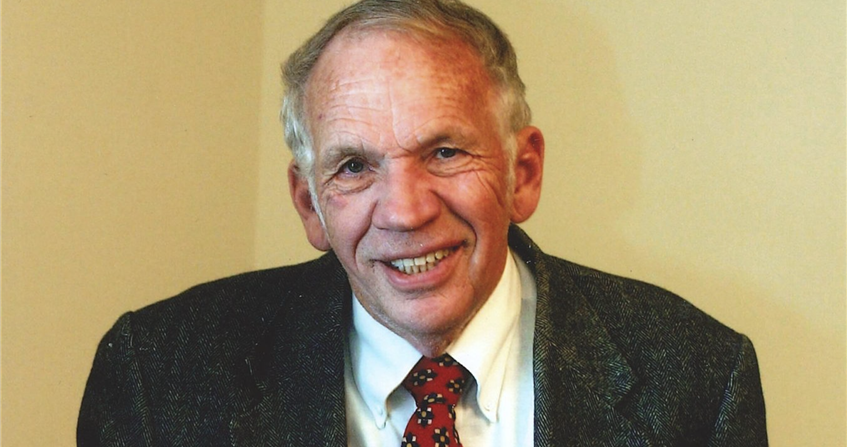 “Bill Cotton was a spiritual giant in the Iowa Annual Conference. A tireless advocate for the least, the last, and the lost, Bill led by example. Bill’s weekly Memo for Preachers was a source of inspiration for countless clergy over many years and will be continued by those he mentored and encouraged. In a conversation we had just weeks before he died, Bill said with his typical humor, ‘I’m not afraid. I just never got it all done!’” said Bishop Laurie Haller. "Thanks be to God for the life, death, and resurrection of our beloved Bill."

Bill Dean Cotton was born in Becker, Texas, on an East Texas sandyland cotton farm on July 19, 1933, the second child of Arthur and Jewel (Lynch) Cotton. His childhood memories included roaming freely outdoors and climbing trees, as well as picking cotton. He developed a lifelong love of nature and an appreciation for the hard work of farming. He and his older sister Ann walked daily to the one-room Lone Oak Country School, located near the Lone Oak Cemetery, founded by his ancestor Weaver Cotton for local residents and traveling pioneers. After the school closed, his family moved to Kaufman, a county seat town. After graduating from high school, Bill worked at the Ford auto plant in Dallas, where his father also worked.

At age 19, he was drafted into the Army to fight in the Korean Conflict. Unexpectedly, he developed acute appendicitis, which delayed his deployment to Korea. When he was deployed in 1953, peace talks had begun, so he was sent to Japan to await the outcome. He became the company clerk and also the Chaplain’s driver, which included attending Sunday services and visiting an orphanage, often taking food from the mess hall to feed the children. During his time in Japan, he formed strong friendships with his African-American comrades, who showed him the racism he’d been taught was (and still is) a myth. After his eye-opening experiences in the military, Bill decided to enter the Ministry, where he could serve and help people. He was Honorably Discharged from the Army in 1961.

In 1956, he married smart and pretty Lillian Glenn, also a Texan. He earned his B.S degree from East Texas State University and then his Master of Divinity from the Perkins School of Theology at Southern Methodist University in Dallas. During his time at SMU, Bill became a social justice activist, protesting segregation at the Methodist Hospital in Dallas. He continued his activism while serving as an ordained Methodist pastor in Texas, which created disfavor with his Bishop. Fortunately, an Iowa recruiter for pastors who came to Texas in 1961 visited with Bill and Lillian, and they decided it was a good time to move to Iowa. Despite objections from their families (“There are Yankees up there!” “You’ll freeze!”), Bill and Lillian with young son Steve headed north in their old Ford. Bill’s first appointment in Iowa was Colesburg in northeast Iowa, population 400, where he served 3 small churches. He found Iowans to be kind, practical, hard-working, and welcoming. He said, “We fell in love with Iowa!” Daughters Melody and Leslie were born during their stay in Colesburg.

In 1965, Bill and his family moved to Cedar Rapids, where he was appointed to finish building Asbury Methodist Church. Bill became involved with the struggles of the African-American community, and in 1970, the Mayor appointed him to be the First Executive Secretary of the Human Rights Commission. Under his leadership, the commission advocated for both racial and gender equality, including a lawsuit on behalf of pregnant schoolteachers that led to a landmark Iowa Supreme Court decision. His advocacy often led to conflict with those who resisted change. Bill’s adult children can recall the frightening nighttime occurrence of a brick being thrown through their front window, a cross being burned in the front yard, and vulgar racist words spray-painted on their house.

In 1974, Bill returned to pastoral ministry, serving the Dayton and Harcourt United Methodist churches, then the Emmetsburg First United Methodist Church. He was appointed by the Bishop to be a District Superintendent for the Creston District from 1983-89, where he was very involved in helping farm families during the devastating rural economic crisis that led to the loss of many family farms and the rise of corporate farming. He was later awarded an Honorary Doctor of Divinity degree by Simpson College, in recognition of his work.

In 1989, Bill was appointed Senior Pastor at Grace United Methodist in Des Moines, where he served for 10 years, until his retirement. During his tenure at Grace, Bill helped to create a homeless shelter supported by the local churches (now Central Iowa Shelter and Services) and A Mid-Iowa Organizing Strategy (AMOS), which focuses on giving voice and supporting action for community needs (including racial equality, housing, mental health, and building the largest skatepark in the US). He was a long-time member of the Prairie Club, where he enjoyed many evenings of stimulating presentations and wonderful friendships.

Since retirement, Bill has served as an interim pastor at local churches, a District Superintendent in Muscatine, a teacher of professional and lay pastors, the writer of a weekly Memo for Preachers, the author of three books about Iowa people and their stories (the third will be out soon), a farmer, artist, and wood-sculptor, and a tireless advocate for those who face constant discrimination, including people of color, immigrants, women, and LGBTQ persons. His last writing was directed at systemic racism perpetuated by White people, which was printed in the Des Moines Register on July 28, a week before he died.

During his tenure at Grace, Bill lost both his parents in Texas. Following his retirement, his beloved Lillian became ill with Alzheimer’s Disease and eventually died in 2009. In 2010, Bill and an old friend Janice Hill fell in love and were married. They had ten wonderful and fun years together, until Bill developed congestive heart failure. He passed from this world at their home on August 3, 2020, two weeks after his 87th birthday. Though it was a second marriage for both of them, Bill and Jan considered all their family members as “our family.” From their first marriages, Bill and Jan have nine adult children including their spouses, fourteen grandchildren including spouses, and four great-grandchildren, as follows:

In addition, Bill is survived by his sister Ann Harris and brother Charles Cotton, of Kaufman, TX, nephews and nieces he adored in Texas and Georgia and Alaska, Jan’s sister and cousins, and good friends too numerous to mention.

Bill’s great love, compassion, creativity, humor, insight, and activism will be missed by all who were blessed to know him! As he wished, his ashes will be buried in the Memorial Garden at Grace United Methodist Church. A Celebration of Life service has not yet been scheduled. Memorials may be directed to Grace United Methodist Church, 3700 Cottage Grove Ave, Des Moines, IA 50311, designated for the Cotton-Hill Family Memorial Fund.