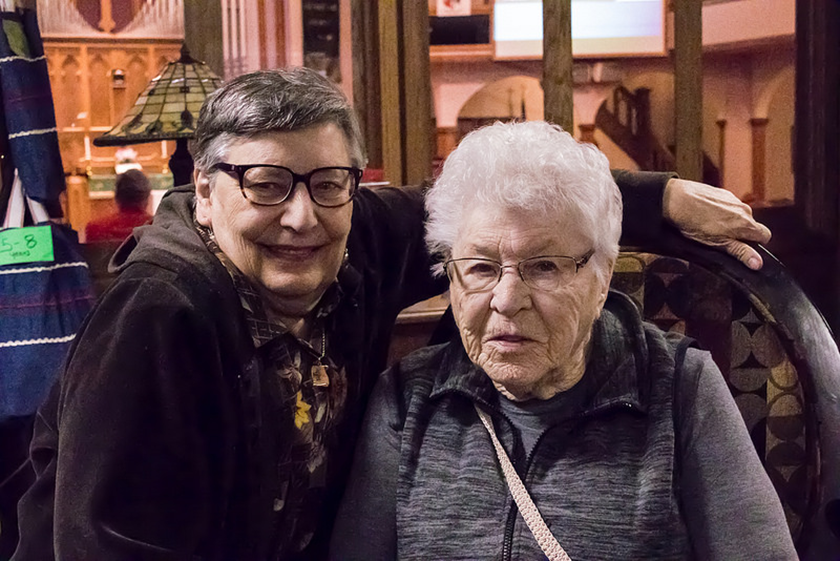 November 07, 2017
share
The first Thanksgiving Ingathering in the Iowa Conference happened 38 years ago. The original organizer of the event, Bill Appelgate, began dreaming of bringing ingathering to Iowa after learning about the concept from a friend in Missouri.

“He didn’t only dream about it, he did something about it,” says 97-year old Dorothy Appelgate of her late husband, recounting the committees and church talks and planning that went into winning support for the idea. “He just kept plodding along really, at the beginning. It was not the easiest accomplishment that he oversaw, but he was on that phone getting support.”

“One of the first Ingatherings, it was a whole weekend,” explains Bill’s daughter Margaret Aiseayew. “People didn’t just come for Saturday morning; they came on Friday and spent the whole weekend.” She recalls a field being fenced off where attendees brought animals. “People brought whole wagon loads of grain. The visual impact of the giving was something that excited people.”

Dorothy fondly remembers the activity and enthusiasm at the Thanksgiving Ingatherings in those early years, especially around the auctions, which were very popular. Today she marvels at the involvement of the church’s youth at the event. “Even the children, when you think about it, they come and they just get right in there and unload all those boxes. It’s exciting to see.”

The Ingathering has grown over the years, resulting in large amounts of money raised along with the in-kind gift, flood buckets, health kits, school kits, and so on. Much of what is donated helps those in need overseas. “Bill always understood the international reach of the ingathering,” says Margaret. “I think he was astonished and never more pleased than the first year we hit a million dollars in gifts. He was absolutely thrilled by that. But the gathering in the harvest, and the possibility of embracing the poor in the midst of the richness of the harvest was just a basic image he carried in all that he did. There’s just so many different ways to embrace the poor—and we have so much. We can’t even conceptualize how rich we really are by comparison to people around the world.”

Dorothy feels a lot of pride for what her husband accomplished, but it was always an ongoing effort that required working to develop support from others. “He read a lot so he became aware of a lot of different things. He could visit with people, anybody, because of his knowledge. And of course I miss him now, because every once in a while I think, Bill, what would you do here? He was respected in a lot of areas.”

Margaret remembers a time when her father was offering some meditations at an Ingathering, just as he was readying to take a research trip for Heifer International to Africa. Margaret was living there at the time, but she was in Zambia, and it would have been difficult for Bill to visit her because of some issues with crossing borders at the time. “Zambia is pretty close to the end of the earth. Nobody stops to Zambia on their way to someplace else,” she laughs. But some people at the Ingathering offered to help Bill pay for an extra leg on his plane ticket so that he could visit his daughter while in Africa. He asked her if she needed anything from the U.S.

“We lived in the village, we didn’t have running water, we didn’t have electricity, we didn’t have indoor toilets. But a part of what it means to understand what it really means to be poor is to not even know what you could use, what you need,” says Margaret. But eventually, she thought of one thing. “I communicated back that we could really use soap, and my father went around to three or four churches and said we needed soap. And he brought a suitcase that was just jam-packed, around everything else, with little hotel soaps.”

He also brought along a game of Bingo, which it turned out that the people in the village had never played before. “And guess what the Bingo won you? A bar of soap!” Margaret exclaims. But she also drives home an important point, which is that the difference to be made in the lives of those in need is not just about material needs like soap or school books—as important as those things are. “No, the difference you make is in their imagination. They can begin to imagine a life and world better than the life they have at the moment. That’s not to disparage the world they have; it’s the world they live in. But from that perspective, hope is a very great distance away. When you foment hope, you call forth the kingdom of God.”

Supporting Ingathering into the Future

Bill Appelgate’s dream that came about some 40 years ago has helped connect Iowa’s United Methodists to people in need around the country and the world. “He was a giver, a get-up-and-go guy. He didn’t sit back and let the other people take on the responsibility. He was willing to do that himself,” says Dorothy. But now it’s up to others to carry on his vision. “There are so many people that are poor, so many people that don’t have what we wished they would. Get on the bandwagon. Give it your support,” she urges, encouraging everyone to get involved in Thanksgiving Ingathering.

“There’s a wonderful old hymn that was written by an itinerant Methodist preacher,” concludes Margaret. “It says ‘The seeds I’ve scattered in springtime with weeping will be harvested by those I don’t even know.’ So if I can scatter some seeds, I can be in the process of calling forth the kingdom of God, no matter what I’m doing.” Click here to learn more about the Iowa Conference Thanksgiving Ingathering