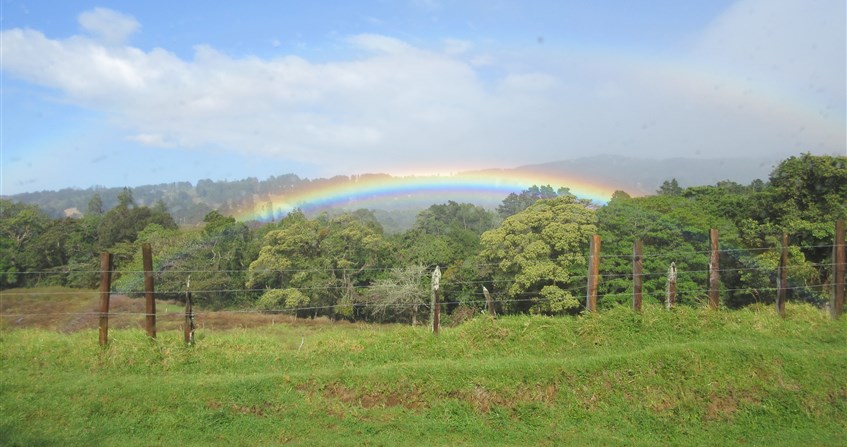 From Bloomfield to Wilton, Moscow to Manning, fifteen Iowa United Methodists left wintry Iowa for tropical Costa Rica on a United Methodist Volunteer in Mission work experience. “Rich Coast” is situated between Nicaragua and Panama, the Pacific Ocean and the Caribbean Sea. Known as “Ticos” their land has a variety of exotic flora, fauna, rainforests, and volcanoes. Scarlet macaws, frigate birds, flashing butterflies and howler monkeys are caught on camera in many places!

Work was with Charlie Strong, a United Methodist Pastor, who founded Strong Missions sixteen years ago after his experience as a work team participant. His ministry is an interdenominational Christian organization that focuses on small communities as Grecia, Alajuela, and Narango around San Jose. Strong Missions works with local schools, churches, offering feeding programs, sewing classes, providing school supplies for kids all help “Ticos” gain basic resources and skills for a healthy life. Some of the work helps those living in the “Precarios” or slums who need steps/stairs to their homes that are built on boulders. The Iowa workgroup put in a series of steps to be utilized by several households.

The workgroup was assigned a four-pronged work detail. A three-room addition with bathrooms had been constructed at a community elementary school. The “to-do” list included installing three ceilings, wiring the building for electricity, plastering the walls in preparation for interior/exterior painting and preparing the adjacent grounds for a garden. In five days, the projects were all completed!

Noah's Ark was the Bible School theme for children at Grecia and Naranjo during the four days. Six Naranjo women were excited to learn more about sewing, laying and cutting out patterns, making blender covers, hot pads and wrap skirts during the four days of sewing classes.

To discover the variety of natural habitats in Costa Rica, the beach resort of Manuel Antonio on the Pacific Ocean was visited. Monkeys were frequent visitors at mealtimes. The Elsie Kientzler Botanical Garden was full of exotic vines, bushes, trees, flowers in a perfect landscaped environment.

A trip to the La Paz Waterfall Gardens was a drippy visit in the Rain/Cloud Forest featuring monkeys, birds, butterflies, hummingbirds, snakes, frogs, “big cats” are well as orchids and five waterfalls. The excursion to Poas Volcano was so cloud laden the crater was not visible.

Our team felt blessed when viewing an exquisitely formed rainbow/arco iris with six distinct colors at the end of our trip. A rainbow of promise for the “Ticos” and Iowans.