The Bishop’s Presence was Powerful 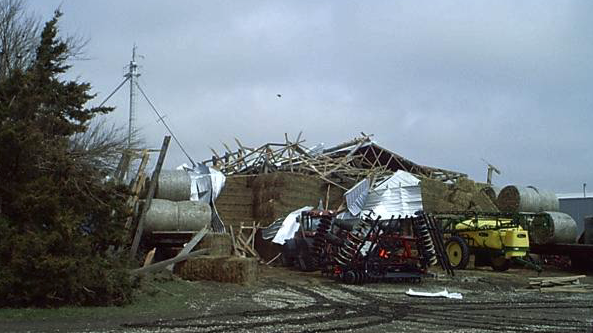 June 14, 2016
share
It’s been over five years since the towns of Nemaha and Varina were badly impacted by an April 2011 tornado. But Rev. Carl Benge remembers well how a visit from Bishop Julius Trimble during that time made a difference to those communities. “It showed them that, for one, that their bishop cared – that the people in Des Moines cared about what had happened to their town.”

On that trip with the bishop, they could see a long trail of destruction that went for miles. “Lots of downed trees and shredded grain bins,” says Rev. Benge, describing the scene. “The fields were almost like silver in color from all the torn up grain bins. The corn was up in the fields, so people that had already planted the corn, they had all this debris.”

He notes that many people were unaware of the extent of damage that the tornado did to rural communities in the area (nearby Mapleton received more news coverage, as it was hit right in the middle of the town). Bishop Trimble was struck not only by the scope of the damage these towns had suffered, but also by the swiftness of the clean-up effort.

“By the time he had arrived, they had already cleaned up a lot of Varina, which was only about four days after the event,” explains the reverend. “In fact, the town of Varina got in trouble with FEMA because they had already cleaned up everything before FEMA could get there and evaluate it. And, in fact, we were about to start the burn pile. They said ‘No, you can’t do that yet! We haven’t evaluated it,’” he remembers with a laugh.

The ruin left by the tornado was hard on everyone, but the church really stepped up. “The greater community of Varina, they got to see the United Methodist Church at work,” says Rev. Benge. “The Red Cross showed up the first day [and] stayed through most of the week, but all the supplies that were received during the week came from the United Methodist Church. In fact, when the disaster coordinator at that time contacted me, she goes ‘What do you need?’ This was like Day 1. She goes, ‘I don’t suppose you need flood buckets yet.’ I said, ‘No, we don’t need flood buckets, but we need water.’ The town, there was no power, they were without water. By that afternoon, the first truckload of bottled water had arrived.”

More water than they knew what to do with was coming in from all around them. “We were distributing water to other communities because we had so much water coming in. Then we had other materials arriving – buckets. And then, over the summer, people came in and did repairs and helped out in the community itself. In Nemaha, they had a very similar circumstance. They didn’t lose power or anything, because the tornado went north of the town, but all the local communities and schools came to Nemaha and did field cleaning,” reports Rev. Benge. “They were all in one big long line, and they just moved through the field picking, cleaning up debris.”

The combination of the bishop’s visit and the UMC’s commitment to helping out right away in the wake of this disaster won’t soon be forgotten. “Seeing the church was there, the communities come together in cross-denominational boundaries was something else,” says Rev. Benge, adding, “The United Methodist Church did wonders in that community.” Echoing his earlier story about Bishop Trimble, he adds, warmly, “They went where they were told to go.”