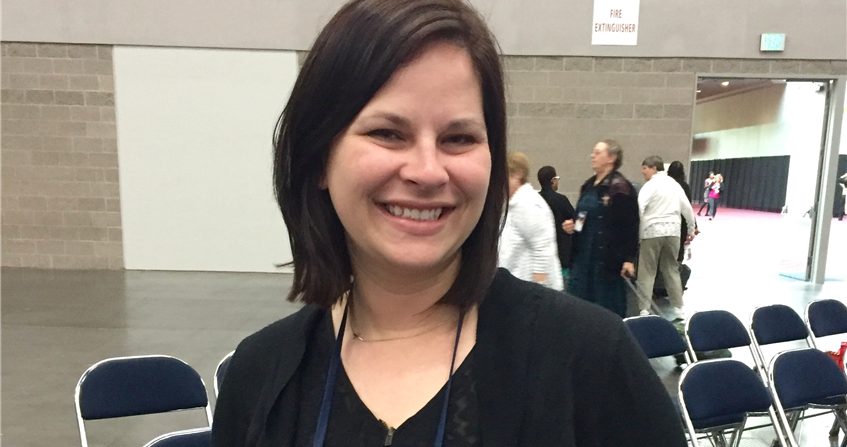 May 17, 2016
share
“I am in Portland because I believe God has called me for this time,” asserts Lindsay Drake, who is a second reserve lay member of the Iowa delegation to the General Conference and one of the younger people at the conference. “We may be the minority here, but we are well represented and we all have a voice. I am encouraged by the number of young people that feel called to be here.”

Young, Dedicated, and Ready to Serve

One of the earliest events that she attended at this General Conference was a gathering of young adults from around the globe. “I have never been bothered by being the youngest person in the room,” says Lindsay. “But one of the gentlemen was speaking about how when he first came to General Conference, he thought he needed to put on a suit and tie to be taken seriously. And how maybe that’s not necessary, maybe we should be taken seriously for who we are and what we have to bring to the table, which might not be a suit and tie.”

Click here to listen to the podcast with Lindsay

A Life in Leadership

Even though she may be on the younger end of the spectrum, conferences are nothing new for Lindsay. “I have been going to Annual Conference since I was in junior high, and I’ve always loved my Annual Conference experiences. So I’ve been involved in leadership in that capacity and leadership as a youth. As a young adult I’ve an opportunity to be in various conference leadership roles. Most recently I’ve been serving on the Board of Discipleship and I have found myself as the chairperson for the Board of Discipleship, so that’s a fun new adventure.”

Lindsay’s career is with the church, serving as Director of Small Group Ministries of Ankeny First United Methodist Church. “I’ve enjoyed how my job at the local church can really impact what’s going on in the district in the conference, so I’ve had an opportunity to connect with local churches through some training opportunities around discipleships and small group ministries. I just love being a part of a connectional church, and that’s important to me.”

Keeping in Touch with Family

With three children, aged 11, 8, and a little one that’s nearly 2 years old, it was a big commitment for to come to the General Conference. “The big kids, they’re pretty self-sufficient, I feel pretty confident leaving them at home. But it’s the young one, we still call he our baby. That’s been a challenge, both logistically and emotionally to leave her at home,” she says. “Thank goodness for technology like Facetime and all that so that we can connect nightly.”
“The other night I heard my husband talking to the kids and talking about why I had to be gone for 12 days, which is a really long time. And he was telling them how God needs mom in Portland,” she says. “That was so comforting to hear, that my husband gets it. My kids can understand that this is important work and that right now I’m needed here.”

Her husband, who works for John Deere, actually comes from a different religious background. “He’s Catholic, so this whole Methodist thing and connectional church is so new to him, so he’s learning a lot and it’s so awesome to hear him say things like that to the kids,” she enthuses.

Bringing Up Babies in the Church

Lindsay has in fact been a big advocate for including babies and children as an integral part of UMC life. “Elizabeth was 8 days old when she went to her first Annual Conference, and that was a great experience,” she says. “Really, the first few months of her life, it was business as usual. She came along with me. I either wore her or put her in her stroller, and she came along and I was so grateful for the opportunity to do that, because the work of the church didn’t stop because I had a baby.”

Others in the church are taking the same approach. “There’s a group of young lay leaders and clergy at the Iowa Annual Conference that were in the same position as me, and we all have children about the same age, and they’re doing the same thing. They’re bringing their babies, they’re paving the way for young parents to do the same. It’s so important to have young people in the church and to make sure that their voices are heard, and life doesn’t stop because you have a baby. I’m so proud to bring my children up knowing that they can do it all, too.”

Raised by the UMC

Unlike her own kids, Lindsay didn’t start life in the United Methodist Church. Her father was Methodist, but not very active. Her mother was Lutheran, but disappointed in the lack of leadership opportunities available to her.

“We ended up transferring to the United Methodist Church, and the pastor there saw some gifts in me. So Gary Van Wert encouraged me about two weeks before Annual Conference to go, and I showed up with my pre-Conference manual in the envelope that it came in, and I sat next to Lynn Potter. He went to Walmart and bought me a binder and he got me all organized. So if it wouldn’t have been for leaders in our church that just came around me and guided me, I don’t think I would be here today,” she says.

“It’s really been the connectional church that raised me here. Between Gary Van Wert and Lynn Potter and Eric Guy, that’s why I’m here today. That’s why when I went off to college, I still came back. Because this church loved me and I love this church, so here I am.”