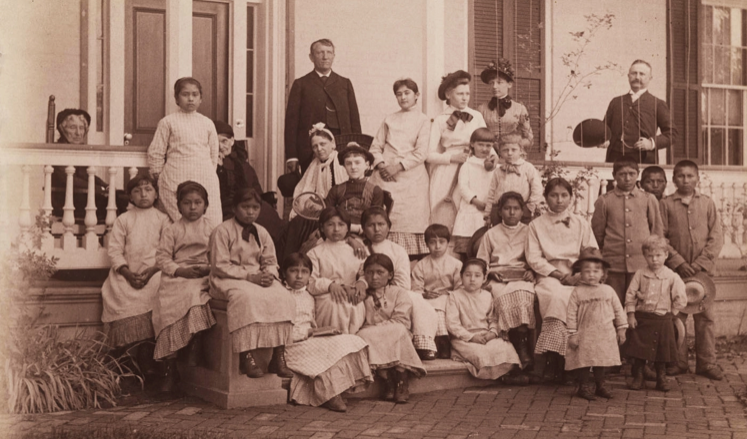 From The General Board of Global Ministries

Recent media reports, a public education campaign, and the announcement of an investigation by the U.S. Department of the Interior have cast renewed light on one of the most shameful practices in the deplorable treatment of the Indigenous people of North America by European colonists across 500 years. This was the forcing of thousands of Native American boys and girls into “Indian boarding schools” in a deliberate attempt to separate them from their families and cultures.

Disturbing new reports from both Canada and the U.S. indicate that, in some cases, large numbers of the young people died in school custody without notice to families and were buried in mass schoolyard graves. Some of these burials have been documented internally in boarding school records, but others have not.

While authorized and primarily funded by the government, some of these schools were also sponsored or operated by religious organizations, including several with Methodist affiliations. Some Methodists and their institutions shared and promoted the sentiment that Indigenous people must be “Christianized” and then “civilized” to be regarded as human beings, or as stated by prominent proponents, “Kill the Indian and save the man.”

We know the names and locations of a number of Methodist-related Native American boarding schools and efforts are underway to identify as many such institutions as may have existed. We need to better understand our complicity in this form of cultural genocide and to bring the boarding schools more clearly into focus in our expression of repentance for the inhumane treatment to which the church and its members subjected Indigenous people in the past. Such repentance was expressed by the 2012 United Methodist General Conference (see below).

The National Native American Boarding School Healing Coalition represents an effort to educate the public in the U.S. about these schools and their lingering harmful legacy. In light of the recent reports of abuse and neglect, the coalition has called for September 30, 2021, to be observed as a National Day of Remembrance for U.S. Indian Boarding Schools. This date aligns with the National Day for Truth and Reconciliation that is dedicated in Canada to residential school survivors.

The National Day of Remembrance is being observed by Native American United Methodist leaders, including the Oklahoma Indian Missionary Conference, Native American Comprehensive Plan, Native American International Caucus and numerous annual conference committees on Native American Ministries. Our agencies join our Native American sisters and brothers in this special occasion, an opportunity for individual grief and collective reaffirmation of the 2012 “Act of Repentance Toward Healing Relationships with Indigenous People.” Suggestions from the healing coalition for ways to remember the victims and survivors of the schools can be found online.

We welcome a recent announcement by U.S. Secretary of the Interior, Deb Haaland, that the Bureau of Indian Affairs will investigate the programs and operations of these boarding schools. We will share information we may discover in our investigation of Methodist involvement in such institutions.

The history of the “Indian boarding schools” is complex and perplexing, particularly regarding religious complicity. Policies and practices regarding such schools in the U.S. took various forms across a century and a half — from the 1820s to the 1980s. Current media attention is on schools reflecting a strict military-style model, the Carlisle Indian Industrial School in Pennsylvania, which opened in 1879. While Carlisle itself had no religious sponsors, others of its ilk did. The promotion of Carlisle-type schools corresponded to the development of U.S. policy on Native people at the end of the so-called “Indian wars,” a time when the reservation system was being implemented for Great Plains tribes was emerging and included a short experiment in using Christian missionaries as administrators of the “Indian agencies.” These schools often transported the young people far away from their home regions. The first class at Carlisle came from Dakota Territory.

There were also earlier Native American boarding schools, usually more local in nature, with mixed patterns of sponsorship — tribal/religious/federal government. At least one Methodist-related example in Ohio in the early 1820s was a tribal/mission school with a federal grant. Some links between churches and the schools lasted for only a few years, while others stretched across decades.

The General Board of Global Ministries and United Methodist Women, which represent Methodist mission outreach in frontier America, are in the process of attempting to determine exactly where and when Methodists sponsored “Indian boarding schools.” In terms of numbers, we have a shortlist of connections that need further research and our work on that will continue.

But regardless of numbers or duration, earlier American Methodists helped to perpetuate the concept that Native people should be stripped of their heritage through forced assimilation of youngsters in residential schools apart from their families and communities. This is not a new awareness, although the schools were not specifically cited in the denomination’s public repentance of its former attitudes toward and treatment of Indigenous people.

The “Act of Repentance Toward Healing Relationships with Indigenous People” was one of the high moments of the 2012 United Methodist General Conference, the denomination’s governing body. The subsequent quadrennial General Conference (2016) adopted an omnibus resolution on “Native People and the United Methodist Church,” drafted by Native members, that specified the forcing of young people into boarding schools as an example of offense. The resolution states:

In the face of renewed focus on the damages done by the boarding schools, we:

General Board of Church and Society
Susan Henry-Crowe, General Secretary