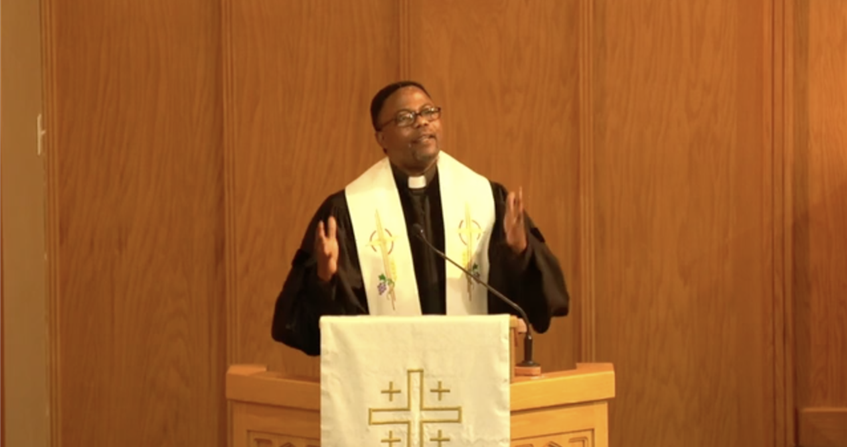 After this, I saw a vast crowd, too great to count, from every nation and tribe and people and language, standing in front of the throne and before the Lamb. They were clothed in white robes and held palm branches in their hands. And they were shouting with a great roar,

“Salvation comes from our God who sits on the throne
and from the Lamb!”

And all the angels were standing around the throne and around the elders and the four living beings. And they fell before the throne with their faces to the ground and worshiped God. They sang,

“Amen! Blessing and glory and wisdom
and thanksgiving and honor
and power and strength belong to our God
forever and ever! Amen.”

He went on to reflect on the day of his father's passing, saying his father died on Maunday Thursday of 2020. People were not able to gather at church because of COVID-19 and were meeting in their homes.

"He shared the word of God that morning. After sharing the word of God, he reminded everybody to meet again in the evening, to reflect on the Lord's Supper, and the last night of Jesus Christ with his disciples," said Lundula.

Lundula's father Joseph touched many lives through his ministry of preaching and compassion. He also served as a medical practitioner. In his practice, he served many people in different cities and towns in The Democratic Republic of Congo. Not only that, together with his wife, they have 11 children, 45 grandchildren, and two great-grandchildren. At his Celebration of Life, there was a big crowd from many different places in the Congo. But what Lundula emphasized was that they were able to estimate how many people were in that crowd.

"My friends, today's message is about another crowd," said Lundula.

This crowd is different from the crowd that I saw. The crowd that joined John, the disciple of Jesus, that he called the "great multitude."

"What did John see in that multitude? Who was part of that multitude? How many people were in that crowd? Where did they come from? What was the attitude or mood? What did they look like? What were they saying? And where was that great multitude standing?" asked Lundula. "This crowd was much bigger than I saw in the Congo."

According to the book of Revelation, John, the Disciple of Jesus Christ, was in exile on the island of Patmos. John had found the favor of the Lord, to see what heaven looks like.

"John was asked to write everything that he saw in his vision, so that someday, you and I may find comfort, may find hope, may find encouragement in moments like this when we remember our friends who went before us," said Lundula. "In his vision, John saw a Great Multitude that no one could count."

The Great Multitude was made up of many people. People who came from every nation. If we put that into our today's context, we can say that there were people from Israel, Russia, Mexico, Congo, China, Nigeria, and so on. They were people from all tribes and people from all the languages and John was able to understand what they were saying.

"I can tell that the Great Multitude was a cross-cultural crowd that was standing all together before the Throne of the Land, the Son of the living God," said Lundula. "They looked beautiful as they were dressed in white robes."

The white robes are the clothing of victory and triumph Lundula said and remind him of his Lord and Savior, Jesus Christ.

"Today, I have good news for you. The good news is that because of the faith in Jesus Christ, our Lord and our Savior, those brothers and sisters of ours are now part of the Great Multitude, that no one could count," said Lundula.

Lundula closed in prayer saying, "Lord, we thank you for your abiding presence in our lives all of the time. Lord, we give you thanks for the gift of your Holy Spirit, the great comforter of the broken heart. As we miss our brothers and sisters, we know that they are now with you. They are part of that Great Multitude in the joy of eternity. Help us, oh God, as we continue to journey in this world. Give us hope and the assurance of your presence and all these we pray in the name have our Lord and Savior Jesus Christ. Amen."