'The mission work is wonderful' 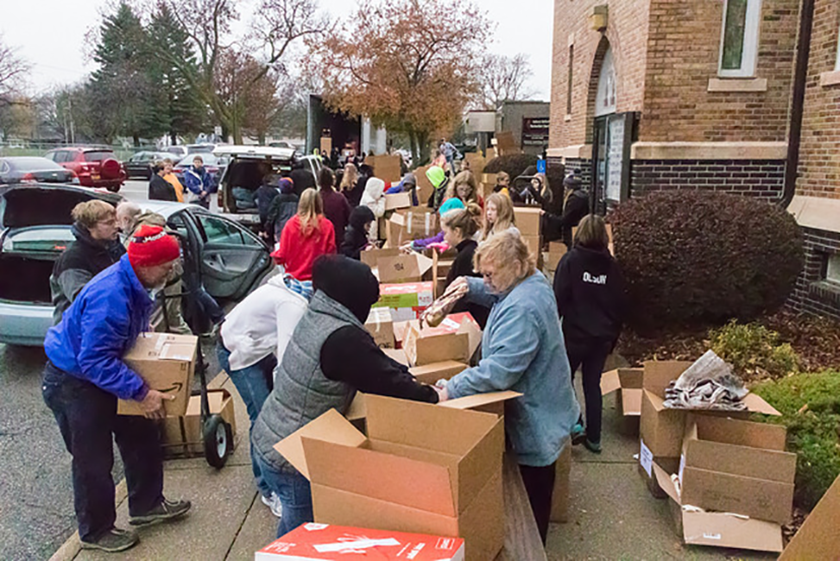 November 07, 2017
share
On the morning of Saturday, November 4, at the Webster City site for the 38th annual Thanksgiving Ingathering, over 40 young people were bustling about, accepting donations and packing them up. Something similar was happening at four other churches in the Iowa Annual Conference at the same time, as people drove in with donations of school kits, health kits, sewing kits, and layette kits for those in need.

“They pull right up and there’s like 10 tables lined up on the sidewalk, and they drop off their kits,” explained Cathi Griswold, Webster City’s co-coordinator. “The kids take them to all the different tables, the designated tables. Then they repackage them, and they load them up on the semi.” The donations were being repackaged in uniform-sized boxes, to ensure that as many items as possible could fit into the truck. Click here to listen to the conversation with Cathi Griswold Most of the youthful volunteers taking on much of this responsibility (along with the help of a number of dedicated adults) had been at the church since the night before as a part of a “lock-in”. The kids had gotten to spend the evening having fun by playing games and enjoying some swimming and basketball at a facility across the street, as well as participating in devotional time together. In the morning, they were treated to a hearty breakfast before getting to work. ​

“They helped set up everything outside,” said Cathi. “They helped set up the tables and the boxes, and then they start with the kits. We give them a little bit of instruction, and tried to wake them up, though the cold did help with that!”

The efforts of the kids, along with Cathi and the adult volunteers (some of whom were at the church by 5:30 am to get things started), are appreciated by many people in the North Central area. “We get quite a few people in their cars that say thank you because otherwise, they would have to drive to Greenfield or another site,” she pointed out.

Though the early part of the morning was mostly dedicated to filling up the semi-truck with donations, there were other important things happening at the Ingathering that day in the sanctuary. “We have a worship at 10:30, and then a speaker,” she noted, adding that they were also doing communion and that they had some mission displays for people to look at. “So it’s a real learning experience.”

Cathi emphasized how nice it was to see the kids and other volunteers all working together at the Ingathering. “It is neat to see how much can be done in one morning,” she said. And it’s all for a great cause. “During the lock-in, they talk about how it goes down and it helps different parts of the country, different parts of the United States—and it goes around to the world.”