The Recognition of Retirement Service—AC2018 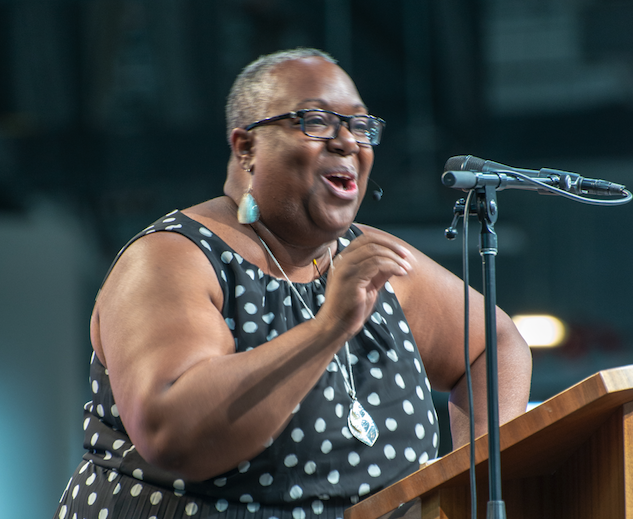 At first, Calderon had planned to use a theme for her Recognition of Retirement address posing the question to retires of “Where are you going?” But she said after thinking more about it, it was more fitting to convey that this is just one more transition in the life of a pastor.

The pastor for United Methodist churches in Stuart and Menlo began by quoting two passages from Scripture; the first from Numbers 8, which concerns the retirement age of 50 for Levites, and John 9:1-7, which raised the question of who had sinned in the case of a man born blind, the man or his parents.

Calderon congratulated this year’s retirees, giving God thanks for them, and saying the Conference was gathered at the Annual Session to celebrate them and bless them.

“What does retirement really mean?” she asked.

Looking at the word’s definition, Calderon explained that it has French roots, and its meaning is to draw back.

In terms of employment, it is drawing back from actively working, Calderon said, then offering a, “Yay!?

“But it almost feels like we should be at a funeral service,” she added.

Calderon proceeded to recite a hypothetical obituary that illustrated in retrospect many of the travails of a pastor’s career.

She concluded the obituary with the Scripture reference, “Well done, good and faithful servant.”

“But the problem is, y’all ain’t dead!” quipped Calderon. “You’re still alive, still amongst the living, still part of the family of God. And this is just another transition.”

If it doesn’t really apply to us, she then asked, then what are we to think about retirement?

Calderon recalled thinking as a child that as a pastor you would work for God until you die, dying in the pulpit, and referenced the passage from John 9 again, which also has Jesus giving the command to work while it is day—for night comes, when no one can work.

“You better take the time that you have to speak about the Lord’s message,” Calderon told the retirees, “because you don’t know when he’s going to take you home.”

She then pondered a question every retiring pastor must consider, “How do you cease from working for the Lord?”

She emphasized for the retirees the importance of remembering the One who has called them for the good work they do.

“It’s about the love of God, and loving God,” she said.

“I don’t care where you’re going,” said Calderon, eschewing her first theme. “I don’t care what you do. Just do the work of God because you love God and you can’t help but do it.”

“That’s the message I’d like to leave with you,” she added. “The love of God is waiting there to be used by you.”

The same God that called you to ministry has called you in retirement, she told the retirees, then raising the longstanding quandary of how to truly retire when they live for God.

“You don’t do ministry—you are ministry,” Calderon said, saying as well that the ministry from which they were about to officially retire still needed them.

“As long as you have breath in your body, we need you,” she stated.

Calderon wished the retirees well, with, “May your latter days be greater than your former days.”

“We thank you for the work that you will continue to do for Jesus Christ our Lord,” she concluded, “I can’t wait to see how God is going to continue to bless you in your lives.”