The river in Winter 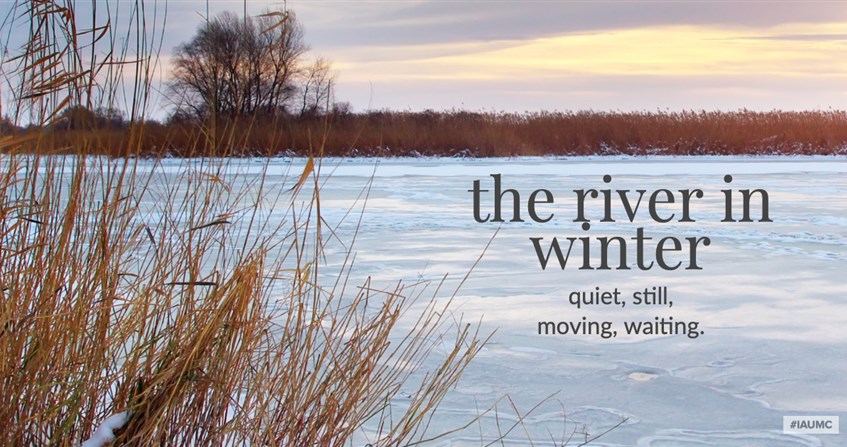 In a vision Ezekiel was transported to the En-eglaim river which flowed from the Throne of God and he witnessed life in all its abundance as the river streamed from that place.

Crystal Lake is a community in the high reach of the North Central District. Once this fall I drove through it on a beautiful day. There were weekenders settled by fires at the campground while hikers circled the lake. Then I noticed a sign which told me “this place is the headwaters of the Iowa River.”

With the help of a map, I traced the river as it flows from Crystal Lake through Britt, Belmond, Dows, Alden, Iowa Falls and Eldora. It exits the North Central District near Gifford. From one place to the next, the river is dotted with parks and sanctuaries for campers. There are herds of deer, groves of trees, and fish. I considered how the Iowa River and Ezekiel's description of the En-eglaim River remind me of each other.
However, seasons change dramatically along the rivers in this state. Ezekiel did not understand how a week of freezing temperatures change a water way. There may be trees along the En-eglaim that produce fruit all year long. But in December the trees along the Iowa River are barren.  Even the birds fly south.

It was like that last winter, too. One day I experienced a bad case of cabin fever. I pulled on my winter gear and took a long walk in the park. It was crispy and peaceful there. At first, the only sound I heard was the wind and the moaning of trees as they bent into it. But as my ear tuned into the quiet, I could detect an unidentifiable, muffled sound. I followed it to the river shore. When I got there, I realized that while I could not see it, I was listening to flowing water. The river was still stirring deep under the ice.  So, I paused and listened to its muted song. When I returned home, my extremities were numb, but I had carried back with me a piece of reassurance.

The church calendar moves through the season of Advent and standing by the river on that cold day made me mindful of two things. Willie Nelson said, “A frozen river is not a dry one.  It may be quiet on the surface, but the water is still moving.” The song of the Spirit may seem to be muted on those especially cold days that can extend into weeks but the Spirit sings. Spring will come.

I was also mindful of a message Paul wrote to the Galatians about the fullness of time.  He said, “When the season was right; the decided upon time - God sent the Son, who was born of a woman, and born as a Jew, to buy freedom for all who once were slaves to the law. Our freedom was purchased so that we could be adopted into the household of God” (Gal. 4:14). The river awaits the advent of spring, and all of humanity awaits the season of God.

A poem for praying:

Our God, heaven cannot hold him, nor earth sustain. Heaven and earth shall flee away when God comes to reign. In the bleak mid-winter, a stable place sufficed. The Lord God Almighty – Jesus Christ.”  (Hymn: In the Bleak Mid-Winter, Christina Rosetti, vs. 1 & 2)