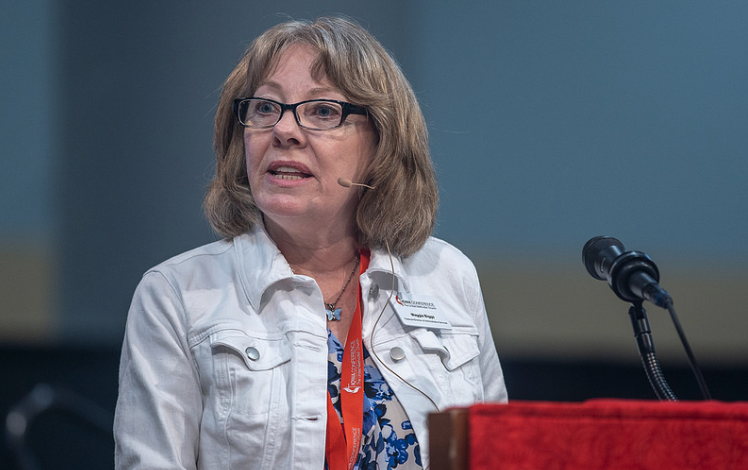 "But I remind myself that God is working in all our lives to help make our local churches, our conference, and our world a better place for all," she added.

Biggs said it doesn't seem possible that she was standing before the Annual Conference Session describing the financial picture for the third year. She said it was a privilege to serve as Conference Treasurer.

"My goal has been to make the operations of the Iowa Conference more transparent and to empower the boards and agencies to be more informed and to ask questions so that they are better informed when making decisions on your behalf," Biggs stated.

Biggs discussed five areas of the budget in her report.

In the first area of statistics, she detailed the same numbers for vital congregations as the year before for consistency. The trends are what's important, she said, not so much the numbers.

"The average worship attendance has continued to drop but has slowed its decline a bit," said Biggs. Evangelism has rebounded. Spiritual Formation had a significant drop, Mission Engagement stayed close to the same as 2016, and Stewardship had a slight decline."

One statistic that the CF&A often looks at is the impact apportionments have on local churches, she said. This goes from a high of 19.3% in 2011 to 17.3% for 2019. This is using a two-year lag on operating income, she explained, so it is an estimated amount.

"In 2017, we received the same percentage as 2015 but on a much smaller total budget amount," said Biggs. "Even when lowering the amount asked it does not increase the percentages paid."

The CF&A felt that the Apportionment Budget could use a tweaking, Biggs said, so that it reflected a better picture of where apportionment dollars are spent. Thus, there is a new Budget format, splitting the Conference Ministries section into two with the new section called Clergy & Congregational Support.

"We left the name Conference Ministries," Biggs said, but I'd like to suggest we rename that section "Connectional Resources."

"The main change in this split was placing the Episcopal Office and Operations under "Connectional Resources," she explained in this th8rd area, "and placing the funding for our three new Directors and four associates along with several small programs under Clergy & Congregational Support."

The benefit of this change is you can see the breakdown, said Biggs.

For Biggs' fourth area of discussion of the 2019 Apportionment Budget, she informed the Annual Conference gathering there are some reductions such as the General Church Apportionments and the staffing alignment. Increases were from salary and benefits, upkeep of properties, increase in demand for support funds for clergy and local church support (district offices and personnel), and the increasing cost of the Annual Conference Session each year.

The Conference Mission section of the Budget has no change in the amount of apportionment asking, said Biggs, although they prioritized where their funds are going.

In the fifth area, Biggs said the CF&A would like to decrease the Apportionment Budget by $1.5 million by the budget year 2021.

"This will not be an easy process," she said. "CF&A felt that a drastic reduction, or even requiring a lower budget each year, would not be the wisest, so this will hopefully allow the Conference to prioritize responsibly and in accordance with the Vision, Mission, and Strategic Priorities."

The Budget is scheduled for a Monday vote. Slides with specifics on the proposed Budget are available online at www.iaumc.org/financeadministration.