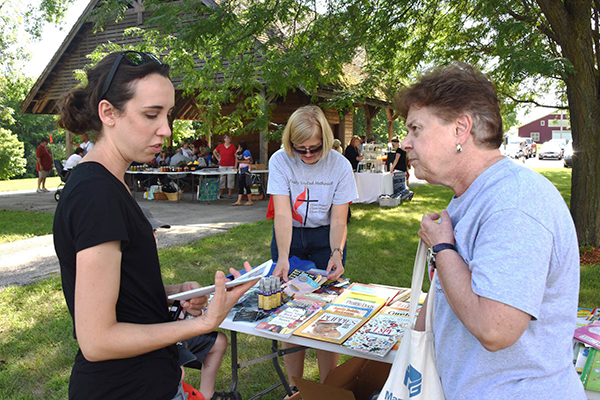 August 24, 2016
share
“They get things done. When they get the idea, they pursue it and get it taken care of,” says Pastor Rick Baarda of Trinity UMC in Huxley. He’s talking about his church’s ‘Dare To’ teams: Dare to Pray, Dare to Dream, and Dare to Act It’s an idea that his church came up with about a year and a half ago, to take the idea of a dream team to the next level – so that they could really start making those dreams come true.

Daring to Make a Difference

“Prayer Team really takes on the initiative of praying for our church, our congregation, me and our staff, our community around us (especially our neighbors and people surrounding), and also for what God is really putting us out there to do,” Pastor Baarda says, describing the process. “Then the Dream team, they come in and they brainstorm, get a lot of different ideas, and that’s when they start whittling things down to a certain amount. Then the Dare to Act and Dare to Dream teams get together, figure out which ones they want to pursue, and the Act team takes it from there and puts it into motion.”

This more organized, three-pronged approach has been helping Trinity bring more outreach efforts to fruition, and it has also activated many members of the congregation. “It gets a lot of people involved that usually aren’t,” he says.

“We dream about a lot of things that kind of go by the wayside because we don’t know how to go about getting them accomplished. That’s where we have some people on the Act team who are doers, and they get things done, and it’s exciting to see. It’s also exciting to see the excitement within the church congregation.”

Back to School Fair

One of the latest results of Trinity’s pray-dream-and-do efforts was a Back to School Fair, done in conjunction with the local farmer’s market. They brought in a variety of vendors, offering families everything from free sandwiches and snacks to temporary tattoos and games. Even the local doctor’s and dentist’s offices were on hand to give kids and parents advice on keeping healthy. Plus, in keeping with the spirit of the Change a Child’s Story initiative, free books were given away to kids visiting the fair.

“Just to see the amount of people that showed up and the amount of kids that came, to see the excitement on the organizers’ faces, it’s really great to see,” says Pastor Baarda. “And all the kids we had, that was fantastic. It’s just something that, for our congregation and everybody involved in it, it just lifted them up and gave them a sense that we can be part of this community and really change a lot of things.”

Nearly 15 times the number of people that typically come to the farmer’s market were there for the Back to School event. “We had to close up really quick because storms moved in about 6:30,” he adds, “but we had a lot more there than what we planned on, so it was really a success.”

More Plans to Engage the Community

Trinity UMC already has more seasonal events scheduled before the year is out. They will be organizing a ‘Trunk-or-Treat,’ where kids go trick-or-treating from car to car in a parking lot, at an assisted living home in the area. “We’ll have a trunk or treat, and then the kids will go inside to the different people and couples in the building,” explains Pastor Baarda. “They live about two blocks from the church, but they don’t get out much, and people don’t know really who they are. This gives a chance for them to see the kids, and for everybody else to see and visit them. So it’s a great thing.”

Then in December, the church will be inviting families to the community center for a special holiday event, where they will be providing free babysitting. “The kids will be able to shop for their parents at our little gathering there, and the parents will be able to do Christmas shopping without the kids for three or four hours. The kids get to pick out things for mom and dad from a bunch of things that have been donated to our church for that reason.”

Becoming Part of the Neighborhood

Pastor Baarda encourages other congregations to step outside their comfort zones and see for themselves how much communities like to see the local church involved. “I have to say probably most all of communities would really appreciate having us as congregations and churches move out and really become part of the neighborhood in doing different things like this. It just brings camaraderie,” he says.

“Huxley’s a town of going on 3,500, 4,000 now, and a lot of people in our church think they know everybody. Well, it’s growing so fast that they don’t. This really opened their eyes that this is one way that we can meet these people and become part of the neighborhood, see what they’re going through, see what they need from us as a church and congregation. Not just to come to the worship service. It’s just to be Christ to the world and the community and neighborhood around us, and it really is opening the eyes of our congregation. It’s fun to see.”

Pastor Baarda is excited to see his church focused on dreaming up new ways to engage with others outside the church. “It really humbles me to see what the community is seeing in our congregation and how we’re starting to intermingle a lot more. It just brings a satisfaction in knowing that we’re sharing the love of Christ everywhere we go. That’s one of our main goals, to be that city on the hill that people can see Jesus Christ through us as we’re doing different things in the community.”