Communicators at forefront of GC2019 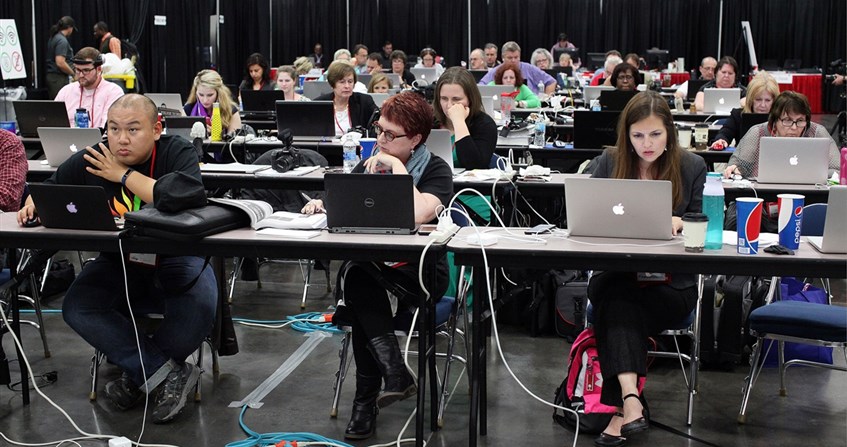 These and other communication methods will help tell the story, and in some cases allow the story to happen, when 864 delegates from around the world meet in a legislative session aimed at holding The United Methodist Church together amid division over homosexuality.

The ministry of communication engages communicators at the local church, annual conference and general agency levels.

“Effective communication is empowering, delivering timely and reliable information, building relationships and providing platforms and channels that connect people,” said Jennifer Rodia, chief communications officer for United Methodist Communications. “Given this moment in the church, it is absolutely critical.”

The Iowa Conference Communicators will be producing videos, podcasts, photos, and news stories to keep Iowa Conference clergy and laity informed during the session. A new website has been created to keep congregations informed: gc2019.iaumc.org.

"Our goal is to help Iowa United Methodists feel connected to what takes place at the special General Conference so that together we can all be engaged in the future of the church," said Rev. Dr. Art McClanahan, Director of Iowa Conference Communications. "We’ll do our best to offer timely, comprehensive, balanced reporting through the live stream, video perspectives from Bishop Laurie and members of the delegation, podcast summaries, photos, and ties to social media and the work of the United Methodist News Service."

United Methodist Communications is at the center of the effort, starting with its Production Team, which has been working with the Commission on General Conference to make sure the necessary infrastructure is in place at St. Louis’ America’s Center Convention Complex.

That means, among many other things, overseeing the sound system and video projection that enable presiding bishops and delegates to be seen and heard within the arena.

The feed this time can be found at umc.org/live and will be in English, French and American Sign Language.

Reporters, editors and photographers from United Methodist News, part of the communications agency, have provided extensive coverage in the lead-up to the special General Conference. They will be on the scene in St. Louis, tracking the action.

“People will be able to access the news through the UM News Daily Digest and our website, umnews.org, and we will be using Twitter to provide quick alerts as major developments occur,” said Tim Tanton, UMCom’s chief news officer.

He noted that news coverage will be shared in English, French, Portuguese, Spanish, Korean and German. Photos will be available both through the umnews.org site and a Flickr feed, and United Methodist News plans a daily podcast.

One of the busiest places at any General Conference is the UMCom-staffed newsroom. The United Methodist News staff works there, as does the agency’s Public Information Team, which handles press credentialing and plans press conferences with General Conference newsmakers.

Secular journalists covering General Conference also work out of the newsroom. It’s home, too, to a large contingent of communicators from U.S. annual conferences and non-U.S. Central Conferences. They tend to focus multimedia reporting on their delegations.

“Most conference communicators try to localize that (General Conference) experience for their churches,” said Mark Doyal, Michigan Conference director of communications and chair of the leadership team for the United Methodist Association of Communicators.

At this General Conference, North Central Jurisdiction communicators will be working as a team, preparing summary videos that can be shown in local churches on the Sunday after the legislative gathering.

Communicators from Zimbabwe plan to use UMConnect, a platform that allows for sharing via text-based messaging services, to keep their pastors and church members informed about General Conference developments, said Chenayi Kumuterera, of the Zimbabwe West Conference.

Ask The UMC, a popular UMCom service, answered about 600 General Conference-related questions in 2018, said director Vicki Wallace. She and a colleague will be in St. Louis for an anticipated flurry of email queries about legislation status and United Methodist polity.

“We’re watching and following everything and trying to make sure we understand what did and didn’t happen, so we can provide those explanations,” Wallace said.

General Conference could not happen without the interpreters who make the proceedings understandable for delegates speaking a range of languages.

Donald Reasoner, who directs interpretation services for the United Methodist Board of Global Ministries, will oversee a 50-person team. Technicians who service headsets and other equipment will back up the interpreters.

Reasoner has been choosing his team carefully, knowing that the subject of homosexuality can prompt heated discussion and remarks that many, including interpreters, might take exception to. 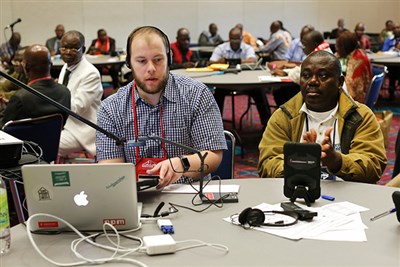 The Advance Daily Christian Advocate has already been published for this General Conference, and it includes petitions and the names of delegates.

Through the St. Louis meeting, the Daily Christian Advocate will come out in print, sharing committee and plenary action on petitions, transcriptions of floor debate, the daily agenda, assorted business items and appointment lists, and various news and feature stories.

Brian Sigmon of The United Methodist Publishing House is the editor, leading a 14-person team. Printing firms are not as common in the internet era, and finding a local one that could handle the Daily Christian Advocate wasn’t easy, he said. But he’s confident that the firm he found, in Eureka, Missouri, just outside St. Louis, will do the job well.

Copy deadlines are tight for the overnight printing job, and there’s no let up when it comes to distribution.

“We have to have printed editions in the delegates’ hands when they arrive in the morning,” Sigmon said.

He and his staff work from morning until well into the night. And one member of the team, Tracey Craddock, will be at the printers through the wee hours to check proofs and make any last changes.

Whatever happens in St. Louis, the work of communicating will go on through follow-up news coverage and a UMCom advertising campaign titled “The Movement Continues.”

And the next regularly scheduled General Conference – quite possibly another “critical moment” – is just over 14 months away.

Hodges is a Dallas-based writer for United Methodist News Service. Contact him at 615-742-5470 or newsdesk@UMCom.org. To read more United Methodist news, subscribe to the free Daily or Weekly Digests.