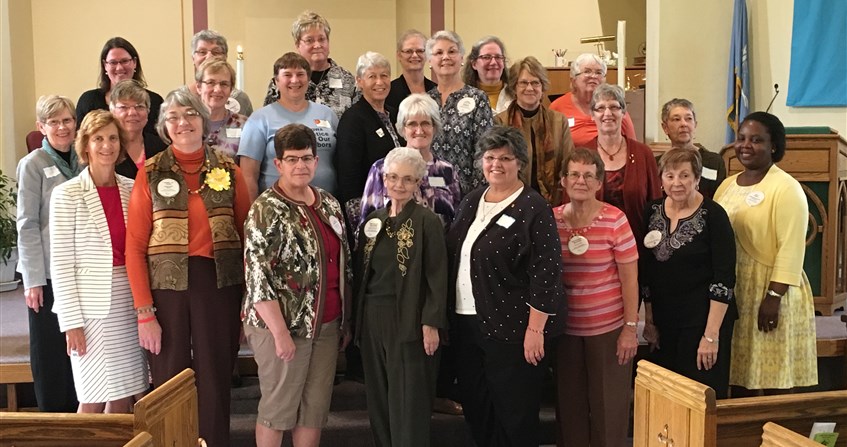 October 12, 2016
share
United Methodist Women of the Iowa Conference  had their annual meeting on Saturday, October 8, 2016.  Held at First UMC, Decorah under the banner of “A Fresh Wind Blowing – Come Soar with Us,” women from across the conference welcomed Bishop Laurie Haller, met for breakout groups, conducted the business of an annual meeting, and endorsed their leaders for the coming year.

Car parkers, hot coffee and treats, and greeters were just a part of the hospitality offered by men and women of First UMC and other UMW units.  That warm greeting welcomed some 36 women who were first-time attendees of the annual meeting.

Bishop Laurie Haller, who was also experiencing her first Iowa UMW annual meeting, spoke to the group, asking, “Are You Living in the Overlap?”  “The purpose of United Methodist Women,” she said, “is mission, but that mission is also right here, among each other and in your local churches as well as around the world.  You have touched more lives than you will ever know.  Thank you for being United Methodist Women.”

“You and I share something in common,” she told the group.  “We have restless spirits.  Our spirits are restless because the Holy Spirit moves in us, calling us to action and empowering us to soar.  A fresh wind is continually blowing, and we cannot rest until all people in this world have food, shelter, clothing, and safety and experience the fullness of God’s shalom.”

Bishop Laurie concluded, “Serve faithfully in God’s kingdom.  Share the good news.  Make disciples for the transformation of the world.  Take the authority of the staff.  Work together.  And don’t let anyone or anything separate you from your mission to change the world.”

Sally Stromseth who gave some background on each hymn and Barb Dale’s accompaniment on the organ led the gathering in singing. Gladys Alvarez, Conference Vice President introduced Decorah's President, Pam Ransom who officially welcomed us and Pastor John Caldwell who was so glad that an Annual Meeting was being held in the Northeast part of the state also welcomed us with some humor.

Linda Stauffer, Spiritual Growth presented thoughtful devotions.  Rita Vallery, President of Iowa Conference United Methodist Women, who had introduced Bishop Laurie, presented her a sheet signed by women who attended summer Mission u welcoming her to Iowa.  District Superintendents, Pastors, and Past and Present Officers in Iowa and those who have served on the Jurisdiction and National United Methodist Women were also introduced.

President Rita Vallery called the Business Meeting to order.  Minutes were presented by Secretary Becky Heeren and placed on file.  Treasurer Ritzanna Seaton presented the pledge to Mission for 2017, which was voted to be $500,000.

In other actions,
Following lunch women could choose between four breakouts.  Barb Dale presented Climate Justice,, Unaccompanied Minors was presented by Kathi Mitchell with six young people present who had fled oppression and shared their stories. Gladys Alvarez and Rita Vallery presented my Privilege Bead Experience and Emily Johnson presented a breakout on Maternal and Infant Health.  Superintendent, Jackie Bradford presented Special Mission Recognition pins to women who have completed their terms on the Conference organization..