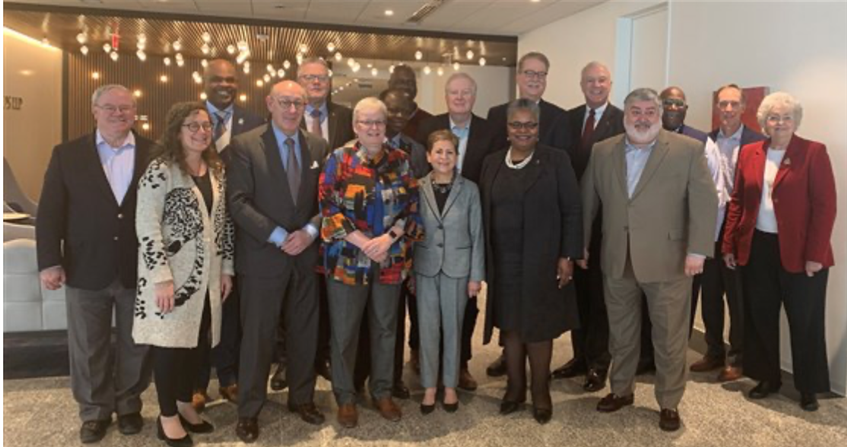 Members of the mediation team. Image courtesy of the Council of Bishops.

Dear Sisters and Brothers in the Iowa Annual Conference,

Grace and peace in the name of our Lord and Savior Jesus Christ as this new year begins. I am writing to make you aware of the discernment of a “mediation team” that has been working for the past several months to bring a proposal to the delegates of the 2020 General Conference in Minneapolis.

The mediation team is a diverse group of representatives from United Methodist advocacy groups with contrasting views and bishops from the US and Central Conferences in Africa, the Philippines, and Europe, all of whom represent various viewpoints around human sexuality. Working with a third-party professional mediator, their goal has been to offer a solution for our impasse around human sexuality in The United Methodist Church.

Attached to this letter are three items.

It is particularly important to note that great attention has been given to bringing all parties to the table. The team was also insistent that we provide a way to continue addressing racism at all levels in the church as we move forward.

I am deeply grateful for the work of the mediation team, whose goal has been to come to a consensus, knowing that in this sacred work, everyone wins and loses something. I also invite you to pray for the laity and clergy members of the Iowa Conference delegation to General Conference as they continue their preparation. As we move into the new year, it is my intention to provide opportunities for dialogue around the contents of this press release and will be back in touch in the near future.

May the grace of our Lord Jesus Christ be with you and with all those whose lives have been and will be changed in the future because of the ministry, evangelism, and mission of United Methodists around the world.

(Washington, D.C.): A diverse group of representatives from United Methodist advocacy groups with contrasting views and bishops from around the world has collaborated on a proposed agreement for the separation of The United Methodist Church (UMC) that has the unanimous support of all the parties involved.

The agreement, the Protocol of Reconciliation & Grace Through Separation, was achieved on December 17, 2019 and announced today.

The action comes amid heightened tensions in the church over conflicting views related to human sexuality after the 2019 Special Session of the General Conference failed to resolve differences among church members.

Legislation to implement the Protocol statement – an eight-page document detailing the terms of a split of the 13+ million-member denomination – is expected to come before the United Methodist General Conference for a vote at their legislative meeting in Minneapolis, Minn. in May 2020.

The 16-member group came together as an outgrowth of a consultation initiated by bishops from Central Conferences located outside the United States.  The parties sought assistance from prominent attorney Kenneth Feinberg, who specializes in mediation and alternative dispute resolution. Feinberg, who served as Special Master of the September 11th Victim Compensation Fund and administrator of the BP Deepwater Horizon Disaster Victim Compensation Fund along with a number of other complex matters, agreed to provide his services pro bono.

Meeting over several months, the unofficial group reached an agreement by signatories associated with all of the constituencies within the UMC for a mutually supported pathway for separation, bridging differences among other plans to be considered by the General Conference.  “The undersigned propose restructuring The United Methodist Church by separation as the best means to resolve our differences, allowing each part of the Church to remain true to its theological understanding, while recognizing the dignity, equality, integrity, and respect of every person,” says the protocol statement.

The document’s signers include representatives from Europe, Africa, the Philippines, and the United States, and include persons representing UMCNext; Mainstream UMC; Uniting Methodists; The Confessing Movement; Good News; The Institute on Religion & Democracy; the Wesleyan Covenant Association; Affirmation; Methodist Federation for Social Action; Reconciling Ministries Network; and the United Methodist Queer Clergy Caucus; as well as bishops from the United States and across the world. The representatives have pledged to work together to support the proposal and develop legislation to implement it.

The Protocol anticipates the formation of a new traditionalist Methodist denomination. Once formed, the new church would receive $25 million over the next four years and give up further claim to the UMC’s assets. An additional $2 million would be allocated for potential additional new Methodist denominations which may emerge from the UMC. Acknowledging the historical role of the Methodist movement in systematic racial violence, exploitation and discrimination, the Protocol would allocate $39 million to ensure there is no disruption in supporting ministries for communities historically marginalized by racism.

Under the protocol, conferences and local congregations could vote to separate from The United Methodist Church to affiliate with new Methodist denominations created under the agreement within a certain time frame.  Churches wishing to stay within the UMC would not be required to conduct a vote. Provisions exist for entities that choose to separate to retain their assets and liabilities. All current clergy and lay employees would keep their pensions regardless of the Methodist denomination with which they affiliate.

Under the Protocol, all administrative or judicial processes addressing restrictions in the United Methodist Book of Discipline related to self-avowed practicing homosexuals or same-sex weddings as well as actions to close churches would be held in abeyance until the separation is completed.  The protocol also references a plan which calls for a special general conference of the post-separation United Methodist Church. The purpose of the Special Session would be to create regional conferences, remove the current prohibitions against LGBTQ persons, and to repeal the Traditional Plan.

Speaking on behalf of the group, Bishop John Yambasu (Sierra Leone) stated, “All of us are servants of the church and realize that we are not the primary decision makers on these matters.  Instead, we humbly offer to the delegates of the 2020 General Conference the work which we have accomplished in the hopes that it will help heal the harms and conflicts within the body of Christ and free us to be more effective witnesses to God’s Kingdom.”

The signatories to the Protocol have provided a FAQ document  to provide additional information about the agreement. Comments and questions may be directed to the signatories at mediationprotocol@outlook.com.

A live stream event will take place on Monday, January 13th to provide further clarity and explanations of the plan by members of the Mediation Team.

This statement is being released by the Council of Bishops Office on behalf of the Mediation Team members.

Members of the Mediation Team