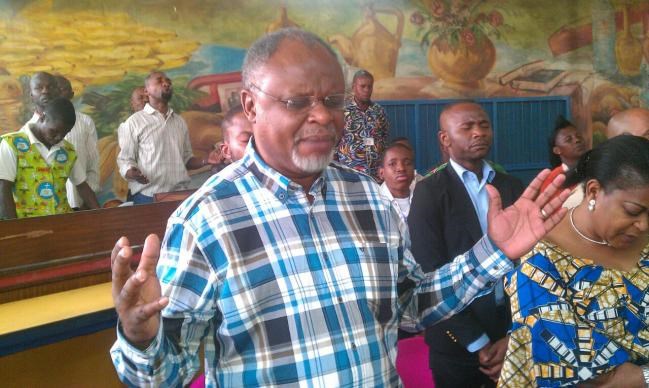 April 03, 2016
share
“He’s still there, and things are up in the air. We don’t know what to expect,” reports Rev. Kiboko I. Kiboko regarding his brother, Vano Kiboko, who remains in a military prison in the Congo. The situation is difficult for the entire Kiboko family. “It is painful – emotionally, financially, and psychologically. It’s been tough.”

Click here to listen to the conversation with Rev. Kiboko I. Kiboko

While some things have improved since Vano was moved to the military prison where he is now held, such as visitation times that were previously heavily restricted (“Now his wife can see him for at least an hour,” says Rev. Kiboko), the family still has serious anxieties about Vano’s safety. “My family does not allow in any food that has been touched by somebody else. If a third person touches, then he’s not even going to eat that food.”

When he was initially imprisoned, before being transferred, Vano had developed his own congregation of sorts. But nothing like that is allowed in his current location. “It’s still very restricted. In fact, there was a decision made by the head of all Protestant churches in the Congo. This is how the Protestant churches in the Congo are organized – there is somebody supervising all the churches. They forbade any Bible studies, any prayer groups in prison.”

Rev. Kiboko speaks mournfully about what the Congo and its people are going through. “The country of the Congo has been raped naturally, geologically, the land has been exploited by people from other countries. And their women have been raped too. Soldiers have been raping babies, teenagers, mothers, and elderly. And they go unpunished,” he says.

“These are the things that my brother had been fighting against, and now he finds himself in isolation. They took him away from his family. He created a faith community there as his second family, and they took that away from him. And so my concern and my disappointment is to see the silence of the church within the Congo. The Methodist church in the Congo isn’t doing much.”

Church leadership seems to be intimidated by the current regime, to Rev. Kiboko’s frustration. “They are so frightened that they’re hesitant to speak. However, the Catholic Church has been very vocal. Very, very vocal. But the United Methodist church leadership, they’ve been very, very quiet. You haven’t read anything from the bishops from the Congo, have you? Pertaining to, not only my brother, but to other civil rights leaders in the Congo. Nothing has been said.”

He is eager to see more action from leaders. “I think it’s time for the church, especially the bishops, to hold their colleagues accountable, because bishops, to me, are general superintendents. They are not only leaders in their episcopal area, but they are leading the whole world. The United Methodist is not just a regional church. We are a global church. Anything happening in Burundi, Congo, Bosnia, Japan, China, South Korea, Philippines, or South Dakota, North Dakota should be the concern of every United Methodist church in the world.”

With the General Conference coming up in May, that may be the best possible opportunity for the church’s leadership to take a serious look at what is happening to people like Vano, and the vast numbers of others who are suffering. “The Congo, that region, has lost over 12 million people in the past 10 years,” says Rev. Kiboko. “I think this issue should be addressed at the General Conference.”

In the meantime, he hopes Iowans will help get the attention of people who can make a difference. “As United Methodists here in Iowa, we can continue to contact our elected leaders, political leaders, so they can urge President Obama to do something. Just imagine if every local church in Iowa would take that initiative to engage each one of their members to do that. We would make a difference, a big difference.”