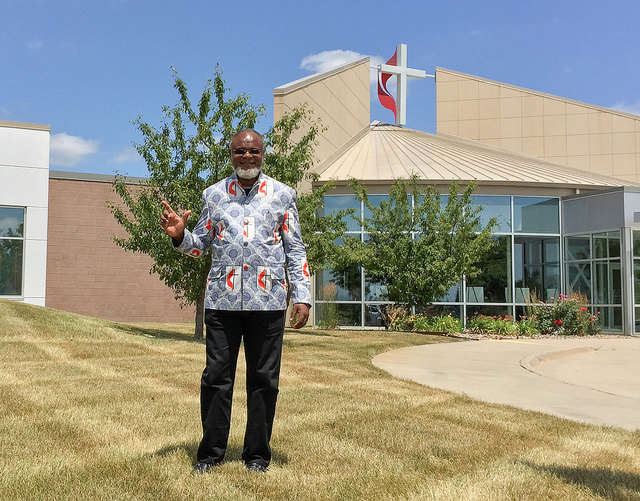 “I am doing very well for now. It’s sure that I am free. I am free from the prison,” states Vano Kiboko in his native French, as his brother Rev. Kiboko I. Kiboko, Superintendent of the East Central District, translates to English. “I want to thank God and thank all the churches in the USA and all the annual conferences that have been praying for me.”

For nearly two years, Vano was incarcerated in the Democratic Republic of Congo for speaking out against the current president, who wanted to go against the DRC constitution and run for a third term. The corrupt leader frequently sent his critics to jail, or made them disappear altogether. “God placed me in that prison for a specific mission,” asserts Vano. But that didn’t mean the mission was easy.

“I didn’t want to accept it. I knew that I was innocent,” he says. “For two weeks. I was shy, not doing anything whatsoever. It was during those two weeks that God spoke to me and said ‘Well, I’m the one who arrested you and placed you here, so you can do my mission. And now I have to remind you that you did not receive the spirit of shyness, but you received a spirit of strength. You are going to stand up and go and walk around the prison, and I’m going to reveal to you what you need to do right here.’ And when I was walking around the prison, I saw and I felt my heart and my spirit in huge revolt.”

God filled Vano with love and passion for the souls of the people in prison who had been arrested unjustly. But of course he wasn’t surrounded only by the wrongly convicted. There were also many murderers, rapists, and other criminals there. “God gave me love for those murderers, and I started preaching around the prison. Every time that I preached, there were at least about 50 people who would come and dedicate their lives to Jesus Christ. And every day, I did not stop receiving people for pastoral care.”

Vano also found that God gave him the power to pray for his fellow prisoners. “People who had bad spirit were saved through prayers, and there were a lot of miracles in prisons,” he reports. “I am not a pastor. I did not have the right to baptize anybody, but when I spoke to my bishop, Katembo, in the Congo, the bishop said ‘God placed you there. You are a missionary. You do have that power to baptize.’ I started baptizing. I baptized more than 500 people in prison, and there were 1500 people in prison who gave their lives to Jesus Christ.”

Unfortunately, his success connecting spiritually with these prisoners did not go unnoticed by the government. “The movement was so big that the government thought that, ‘Hey, this is a danger for us.’ They thought that I was going to create an insurrection in prison. They were afraid and they took me away from that prison and placed me in the military confinement.”

Vano continues to pray for his prison congregation, and he has tried to get in touch with different contacts to find out what is going on there. “I know that it’s very difficult when the pastor is not present. They’re trying to go to all the churches that are in prison there. And the small groups that I created in military confinement, they continue,” he says. “They need spiritual support. They also need material stuff, financial support. That’s why I created Vano Ministries, to continue to assist them and to encourage them in their faith.”

Having first come to know God in 1976, Vano celebrates this year as the 40th year of his spiritual journey. However, he feels that these last two difficult years were special. “God taught me how to serve him in another way,” he affirms.

Through these trials, Vano managed to keep his spirits up, but not through just his own faith. “When your faith is supported by other people, you become stronger. And you don’t even understand where your strength is coming from!” he says. He cites Ephesians 6:18-20, explaining, “When Paul was in prison in chains, he asked the judge to pray for him, for him to have the strength to preach the gospel with power. This is what happened to me.”

His brother Rev. Kiboko made sure that the churches here in the U.S. were aware of Vano’s plight, enjoining them to contact their bishops and to pray for him. Vano felt this support strongly, and references another biblical story that mirrors his own experience. “Remember the example of Moses when he went on the mountain to pray? He was supposed to pray for Israel who was going to fight against the Malachi. Joshua was fighting, and Moses was praying. And the Bible says when Moses was tired and he stopped holding up his hands, Joshua lost his battle. Then there was Aaron who held his hands up, and they brought the stones to support his hands up. And he prayed all day, and Joshua won the battle,” Vano declares.

“The church is called to pray for other people. We have to continue to pray with our hands up for other people, so that those who are fighting for justice, they win. This is what you did,” he says. “You made my faith remain strong through your prayers and this is where my power came from. It came from you and the church.”