VIM—doing God's work in the sun/son 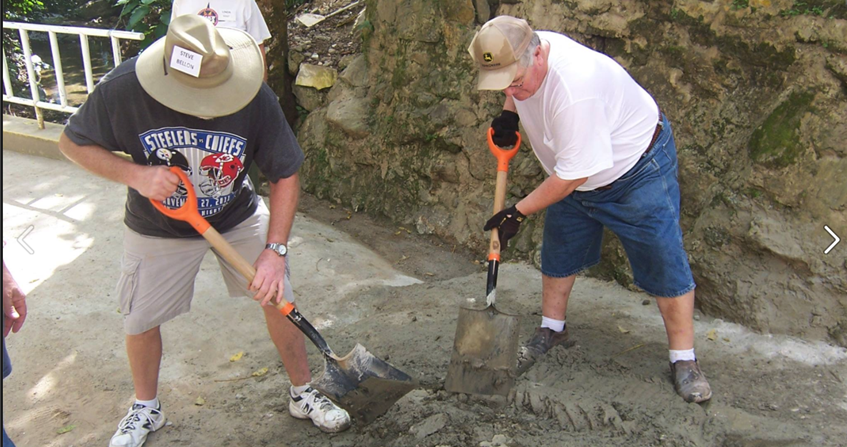 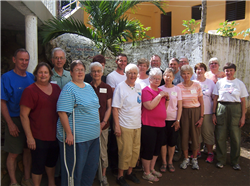 On the thumb of northern Dominican Republic is Samana, nestled among palm trees listing toward the sea, in a bay where 3,000 spouting humpback whales winter to have their babies. The Dominican Republic shares an island with Haiti but is more than two-thirds the size of its smaller neighbor. It is Spanish speaking being discovered by Christopher Columbus in 1492. It is said that this country is the most visited destination in the Caribbean and we Iowans believe it.

This was the work destination, from January 15 – 28, of 18 Iowans from twelve Iowa churches from Attica to Woodward. Samana is the location of an Iglesia Evangelica Dominicana (IED) church where Rev. Pedro Rodney is the new pastor. This church put down roots in 1922 with Wesleyan Methodists and Moravian ties. There are three UM missionaries on the island. Gordon and Ardell Graner were the coordinators of our team.

Two retaining walls were built near the church, a large metal church sign was welded to a frame, lettered and placed atop the church for those passing by to read. A cement path was poured beside the steps into the church. The men worked on a new parsonage to help level the dirt/mud/clay soil in preparation for pouring the flooring. It took several days for our electricians to figure out the electrical system, to install lights in the bathrooms and in the fellowship hall! Let there be light and there was! 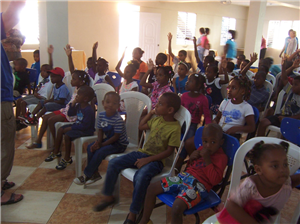 Over 200 children learned about Noah and the Ark….all in Spanish with the help of our translator, Kenual Dishmey. Older children had lessons on the life of Jesus. Playing games were part of the fun with a group playing whiffle ball in puddles, dodging horses and poop on a baseball field used by Dominicans who made it to the Major Leagues.

The church ladies wanted to make potholders (30) for use in their kitchens which were highly decorative and prized by them. Using the sewing machine we took with us, three large banners were made, one decorated with hands of the children, a Jesus one using John 11:25, and the ark complete with animals cut out by the kids. A variety of sock and stick puppets were made for use in the Sunday School. Brainstorming sessions were held with Ardell Graner to create Sunday School curriculum for the children.

The group traveled to attend the National Assembly of the IED in Bani, on the southwest coast. Our task was to paint a 265 yard, 5-foot high cement fence with yellow/brown which we did between periods of rain. Imagine 18 people, with rollers and paint brushes, moving slowly along the fence to complete the task!

Sunday morning worship expressed a joyous celebration of music and message. Who doesn’t enjoy a two-hour service? Two of our clergy pastors, Rev. Crystal Oberheu and Rev. Vickie Steffes presented a tag team message, with our group being presented and songs sung…in English.

Rice and beans were the basic meal along with seasonal fruit, pineapple, watermelon, papaya, bananas and a variety of cooked vegetables prepared daily by Grisell and the local church women. They cooked over an outdoor cement “stove” with firewood as fuel. 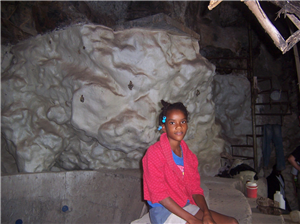 An unusual trek took us to visit fourteen displaced Dominican families who call caves and wooden shacks their home. With their land and homes were taken over by the government they had no place to go but to find shelter and live in primitive conditions. The church gave them bags of rice, macaroni, laundry soap, salami, crackers and other food to supplement their meager diet. A small group made visits to the homes of disabled church members where prayers and hymn singing was enjoyed by all.

An afternoon at the pristine white sand beach was delightful, a four-hour excursion into the bay to watch for whale blow holing was exciting! These huge mammals are identified by the design on their dorsal fins.

We give glory to God that we Iowans were privileged to meet Jesus among the Samana church members while enjoying the sun that appeared daily overhead.