Volunteers in Mission visit to Israel and Palestine 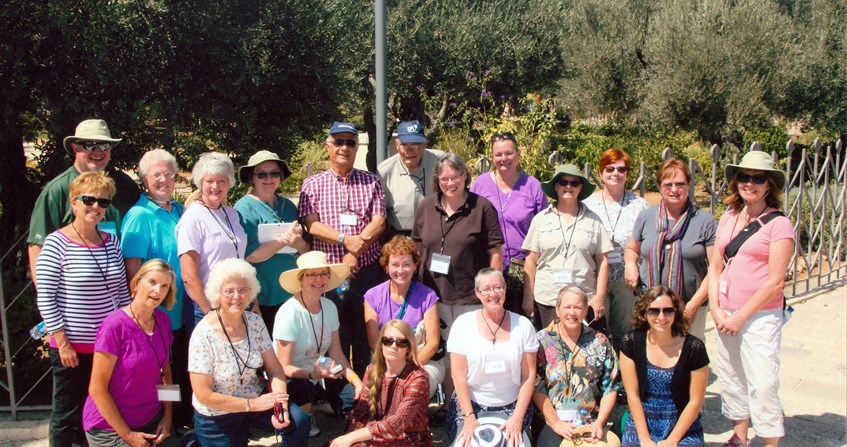 February 15, 2016
share
For two weeks in September 18 people participated in a Volunteer in Mission trip to Israel/Palestine. We visited many holy sites but the most meaningful experiences included the reaffirmation of our baptismal vows at the Jordan River, sailing on the Sea of Galilee and Holy Communion at the Garden Tomb in Jerusalem. 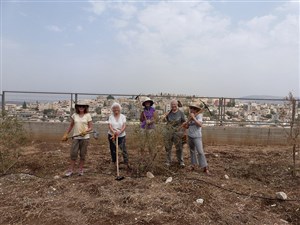 In addition to visiting sites, we spent most of our time working with Palestinians. Our first four days were spent in the town of Ibillin in the Galilee region. Here we worked and stayed at the Mar Elias Educational Institution and while there experienced exceptional Middle Eastern hospitality. Our time at the school was spent clearing an olive grove that was overrun by weeds and sanding and painting handrails and window coverings.

The rest of our time was spent in Bethlehem. We were fortunate to stay at a hotel just a block off of Manger Square. Our mission projects in Bethlehem were varied. The group was divided into smaller teams that worked at several locations. We worked at Hope Secondary School, an Advance Special project of the UMC. The group cleared and painted a storeroom, collected eggs that are sold as part of their funding source, helped students with their English, completed an art project with special education students and swept the roof in preparation for collecting rain-water for use on the campus. 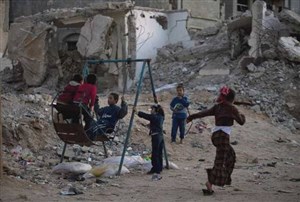 We also worked with young children at a local kindergarten, playing, helping with snack time, singing and just enjoying the children. Others worked at the Bethlehem Bible College also an Advance Special project. Here the group cleared flower beds, picked up trash, helped in the kitchen and added books to their electronic catalog.  The week before we arrived the area had experienced a severe dust storm covering everything in a thick layer of dust so others in the group dusted shelves and items in the gift shop.

Our entire group spent a day at the Tent of Nations. This family sponsored organization/farm seeks to embody a positive approach to conflict and occupation. In May of 2014 Israeli soldiers came to the farm and uprooted several thousand of their fruit and olive trees. Volunteers have since replanted their orchards but the trees are small and need frequent watering. In the searing heat, our group carried buckets of water up and down hills to water these new saplings. Before watering, a pick ax was used to dig a small hole; water was poured in and then covered with soil to keep it from rapid evaporation. It was a long and hot day. 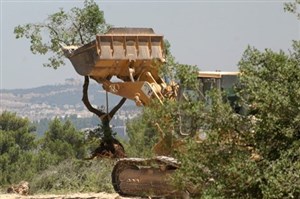 Our work was important but not as valuable as spending time with the Palestinian people and hearing their stories and the struggles they face every day while living under occupation.


The Suffering of the Palestinian People 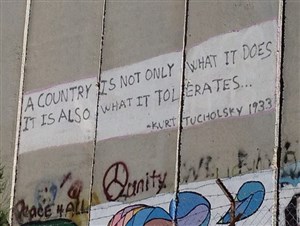 Jesus came to give sight to the blind, liberty to the captives and deliverance to the oppressed.  That was his mission and the mission he handed on to us who follow him. This God we serve is passionate about all of his children and longs for justice for all.

The persecution of the Jewish people is well known and often discussed but the suffering of the Palestinian people is seldom told. During our time in Israel/Palestine, we listened to stories and saw firsthand the daily struggles of a people who live under occupation.

Would you call these situations just?


These examples are but a few of the many injustices faced by Palestinians. The prophet Micah calls on us to “do justice.” What does that mean to United Methodists in this situation?

As a church, we have passed many resolutions and statements regarding the conflict. Resolutions on Opposition to Israeli Settlements on Palestinian Land, Saying No to Violence in the Middle East Conflict, Aligning UMC Investments with Resolutions on Israel/Palestine and on and on. Unfortunately, we are all talk and no action. We say we are in favor of justice for Palestinians and yet these resolutions do little to change the realities on the ground. We need to take specific steps to stop the injustice.  At the present time, the United Methodist Church has investments in companies that support and profit from the occupation. As a denomination, we need to divest from those companies. Former United Methodist missionary to Palestine Rev. Alex Awad reminds us that “the church that is not ready or willing to hear the voice of the oppressed and stand with justice is out of sync with the will of her Head. “The challenge is before us. How will we respond?