With Singleness of Heart and Action 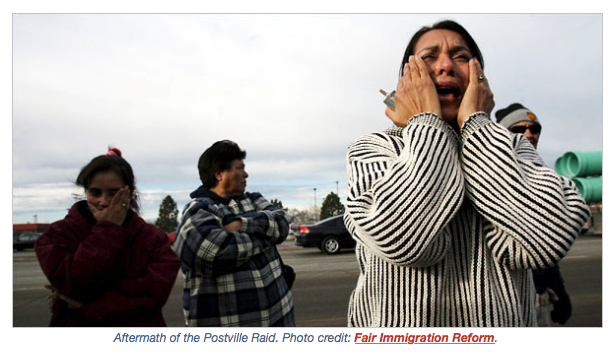 In May 2008, Sol Varisco was working with Catholic Charities of Iowa. An Argentine immigrant teacher who had studied at Iowa State University, Sol was in charge of coordinating a state-wide emergency response for an immigration raid they all suspected would soon be coming.

“The Bush administration had already approved a lot of money for raids,” she states.  “So we were making plans for a raid of maybe 40-50 people.”

What happened next, she says, “totally blew our minds.” Over 1,000 U.S. Immigration and Customs Enforcement (ICE) and other federal agents, heavily armed and wearing full SWAT gear, descended upon a kosher meatpacking plant in Postville, Iowa, on May 12, 2008. Nearly 400 immigrant workers at the plant were arrested. Within four days, some 300 of them were convicted on document fraud charges.

It was, at that time, the largest workplace immigration raid in U.S. history, and Sol was in the center of it. Within hours, the hundreds of volunteers and a group of pro-bono immigration lawyers who had been waiting for her order began streaming into town. They and the other volunteers needed to know where to go, what to do and whom to help. Meanwhile, ICE was stealthily moving the workers from jail to jail, scrambling to deport them within 48 hours, before Sol and her people could secure them access to qualified attorneys.

“They made the immigrants dress as criminals. They wanted to humiliate them, to diminishthem.” Sol pauses, shaking her head. “But whatever message Bush was trying to send, it backfired on him. He truly opened a Pandora’s box that day.

“The worst moments,” she says, “bring humanity and justice together.”

Because it’s the right thing to do

The “Pandora’s box” that the Postville raid opened had a lightning effect on the residents of the surrounding area and towns. The families ripped apart were not abstract numbers on an accounting book; they were fellow congregants, classmates, and friends. Communities, schools, and churches immediately set about organizing to help their remaining immigrant neighbors.

There were the usual calls for food items, rent money, and school supplies. It soon became apparent, however, that what their immigrant neighbors needed most was access to expert immigration legal services—and the closest immigration attorney was two hours away.

Iowa JFON was already operating five clinics in the state. Decorah—30 minutes away from Postville—became the sixth.

Today, as the people of Iowa JFON look forward to celebrating their 20th anniversary in 2019, they can also look back on their history of growth and achievements with pride. They now operate seven clinics across the state. From January to October of this year, they’ve served 1,026 clients from 60 different countries. They have highly qualified staff members, wonderful volunteers, and dedicated board members under the leadership of chair Frank Camp.

What they have been missing before Sol’s arrival, however, is a leader on staff to guide and manage their growth through challenging years ahead.  They can now add her hiring to their list of accomplishments.

Sol first discovered Iowa JFON through its founder, Doris Knight, a fellow congregant of Trinity Las Americas UMC, a congregation with a zeal for following the Wesleyan example of putting faith and love into action.

Sol was a volunteer interpreter for IAJFON for many years, witnessing firsthand their commitment to providing expert immigration legal services to their community’s most vulnerable and disregarded neighbors.

“What I liked—and still like—the most about JFON is that they help people of all faiths, or no faiths,” says Sol fervently.  “All means all.”

Sol has already set several specific goals for the next few years: a permanent and centrally located office (currently Iowa JFON is split between two office spaces 15 minutes apart from each other), to secure funding for their existing immigration attorneys, and also to hire two additional attorneys to address the needs of their many rural clients.

Sol also wants to continue to be a bridge between the immigrant community and native Iowans, and to continue to use her skills to make this a more just world.

“I found my village,” she says, smiling. “This is where I belong.”