Women at the Well connect with law enforcement 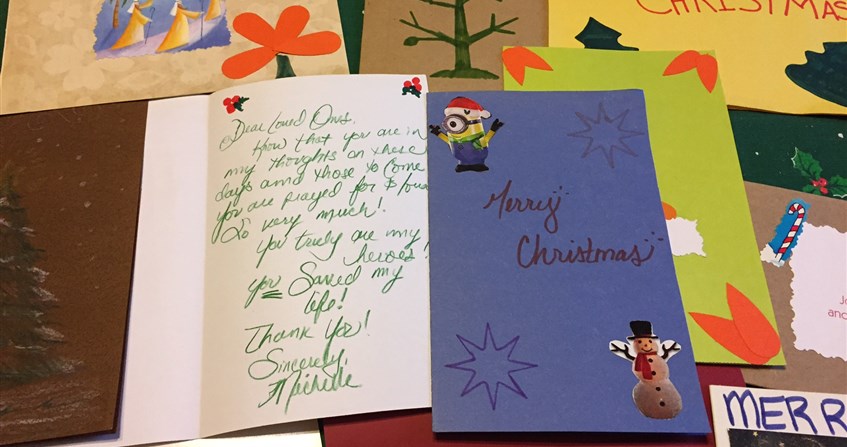 This past Christmas, Pastor Lee Schott saw the most unlikely of friends: incarcerated women and law enforcement.

Schott has been the pastor the Women at the Well for the past five and a half years. Women at the Well is the only church in the Iowa women’s prison in Mitchellville, east of Des Moines. Every Christmas, the incarcerated women make and send Christmas cards to different groups and organizations. The last few years, the cards were sent to domestic violence shelters. This year, though, they were sent to police departments around the country.

“Every year, we think about who we might sent cards to,” said Schott. “Our (council) meeting this year came right after the Urbandale shootings, so that was very much on our minds.”

During the Third Annual Christmas Open House, card stations were set up for the women to write their thanks. Schott said the women were all extremely open to the idea of sending their well wishes to police officers, the very people the women could very likely resent. Surprisingly, many of the women have said how grateful they are for police intervention in their lives.

“The women were saying we ought to be telling them how much we appreciate what they’re doing,” said Schott. “Some of the women say, ‘If it weren’t for the police, I’d be dead by now.’”

An inmate named Michelle wrote, “Dear Loves Ones, know that you are in my thoughts on these days and those to come. You are prayed for and loved so very much! You truly are my heroes! You saved my life! Thank you!”

Since sending the cards out in December, Schott said she has received letters of thanks from different police departments for the women’s kindness this past holiday season. Schott posts the letters on her door at the prison so the women can continue to see the police officers’ appreciation. For Schott, the cards and letters just seemed like the right thing to do.

“This was really kind of a right thing at the right time,” she said. “I believe what we’re doing makes a different to people in terms of their faith.”