Your Foundation is growing! 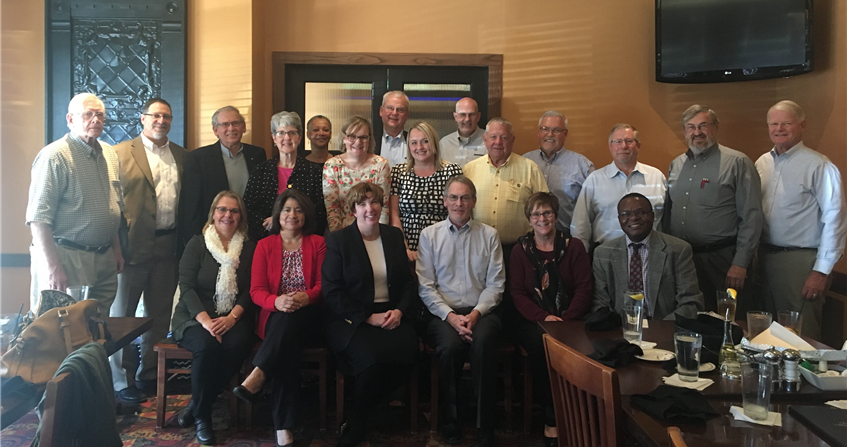 January 02, 2018
share
The Iowa United Methodist Foundation is growing again this year. Not only your investments and funds at the Foundation, but also with new faces around the office.

Kevin Gowdy retired as Director Emeritus at the end of 2017, after several decades at the helm. He will be working on his Gowdy Christmas Tree farm in Melbourne, and enjoying his children’s high school years. He will work with his wife Laurie, a Financial Advisor with Thrivent Financial Services in Marshalltown and Baxter. He has had an immeasurable impact on the growth and success of the Foundation!

Kevin has served as the executive director of the Marshalltown Area United Way and The United Way of Iowa (1984-89), director of annual giving at Iowa State University (1989-1991), executive director of the Iowa United Methodist Foundation (1991-1997 & 2009-present), and owner and lead consultant of Solid Ground Stewardship Services (1998-2008). He has a B.A. from the University of Iowa and a M. Div. from United Theological Seminary of the Twin Cities.

​To better help with the Building Fund Trust Certificates, which support churches remodeling or growing, as well as earning steady income for the investors, Cassie Parks has joined the team. She grew up in Remsen, Iowa, with two older brothers.  She attended UNI and earned her Bachelors in Business Administration. She met her husband while in College; he is from Adel. Her brothers and her husband all served in the same Army National Guard unit in Iraq and Afghanistan. She and her husband Shawn have one son, Rhyker, and 2 miniature Schnauzers – Nala and Tucker. She likes the Hawkeyes, and her hobbies include motorcycles, instructing at Farrells, and running 5Ks and half marathons. Welcome Cassie!

Katharine Yarnell has begun serving as the new Executive Director of the Foundation. She grew up in Canada, then moved to Iowa to attend Wartburg Seminary in Dubuque. She and her husband Ron served ELCA Lutheran churches in Kansas for ten years. She worked as Director of Annual Fund and Alumni Relations at Wartburg Seminary, then with Estate Planning at Grand View University in Des Moines. For four years she served as a Field Outreach Minister in the North Central District.  She is delighted to put the pastoral and financial pieces together at the Iowa United Methodist Foundation!

The Foundation is your Partner in Stewardship, so please contact us with your investment and long-term financial stewardship questions. info@iumf.org 515-974-8927 www.iumf.org