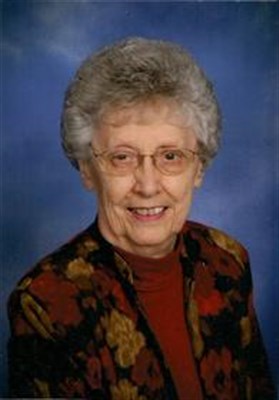 Funeral Services will be held at 10:30 am on Wednesday, November 26th at Grace United Methodist Church W 3rd St in Spencer, IA.

Lucille May Hansen, the daughter of Rev. Louis and Bernice (Somers) Runion, was born July, 17, 1929, in Mexico, Indiana. Lucille graduated from Lake Park High School. She attended nursing school through the Methodist Hospital in Sioux City, Iowa, and received her RN degree. She cared for many as a nurse in Sioux City, Iowa; Duke University, North Carolina and was the school nurse in Titonka, Iowa for two years.

On December 27, 1950, Lucille married Pastor Paul Hansen in Dike, Iowa. She was a member of the Grace United Methodist Church in Spencer, and belonged to the United Methodist Women Club. Lucille also worked with Hospice, and enjoyed doing handwork, craft work and knitting. Lucille started the Prayer Shawl Ministry in Spencer and always accompanied Paul in all aspects of his ministry.

Lucille passed away on November 21, 2014, at the Spencer Hospital at the age of 85. She is preceded in death by her parents; and one daughter, Judy Swiden.

Left to cherish her memory are her husband, Paul of Spencer, IA; one son, James Hansen of Texas; one daughter, Carol Hansen of Spencer, IA; three grandchildren: Caitlyn, Adam and Jennifer; one brother, Lawrence Runion of Anaheim, California; one sister, Joyce Chase of Charleston, Illinois; and other nieces, nephews, friends and relatives.

Memorials may be sent to the family for future designation.